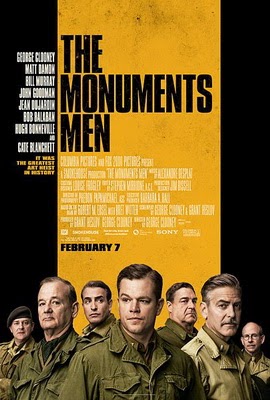 In the latter half of World War II an international mission is sent into western Europe with the explicit task of saving Europe's master art works from being stolen or even destroyed by the retreating Nazis. This true story (sort of - they underplay Britain's involvement in a long-running tradition of American war films) forms the basis of The Monuments Men, the most recent film from actor, writer, director, producer and all-round multi-hyphenate George Clooney.

Saving art from the Nazis is certainly a fresh angle for a war movie, and one that allows for a whole new perspective on the usual World War II genre. In practice it's a leisurely excuse for Clooney and an exceptional ensemble cast to perform a variety of beautifully constructed little scenes. This is an overly long film, and its narrative is rather flabby, but each individual section is wonderfully staged and performed that it's difficult to mind too much. It makes The Monument Men that rare movie that's highly enjoyable, but in which the parts are better than the whole sum.

The film very rapidly breaks into a series of double acts. In Paris Matt Damon plays a New York art curator desperate to get a French clerk (Cate Blanchett) who may have collaborated with the Nazi regime to help him identify stolen art from Paris. Meanwhile out in the field two teams, one comprising John Goodman and Jean Dujardin and the other Bill Murray and Bob Balaban, race to stop the Nazis from escaping with some of Europe's most important cultural treasures. Bouncing between them is Clooney as Lieutenant Frank Stokes, who leads and supervises the group as they move their way east in the shadow of the front lines.

My recommendation is to not care about the overall film too much. Sit back and enjoy the interplay between these stunning, best-of-their-generations actors. The absolute highlight is Murray and Balaban as a pair of bickering architects, each with a whole that I would swear were hand-crafted for them. They share a late night encounter with a sole German soldier that's the film single-best scene. Also fantastic are Goodman and Dujardin, whose storyline runs from comedy to drama with a very delicate touch. English actor Hugh Bonneville also has a remarkably powerful plot thread as a disgraced, alcoholic British officer who joins the mission as a chance to redeem his reputation.

To be honest the film probably does not achieve what it was supposed to, and with a cast this prestigious and a very talented director in Clooney it could and should have been better. Sometimes, however, it's okay to just sit back enjoy what you've got and not what you were hoping to get. The Monuments Men has a fine cast in excellent form, and it's a pleasure just to watch them perform.
Posted by Grant at 10:08 PM