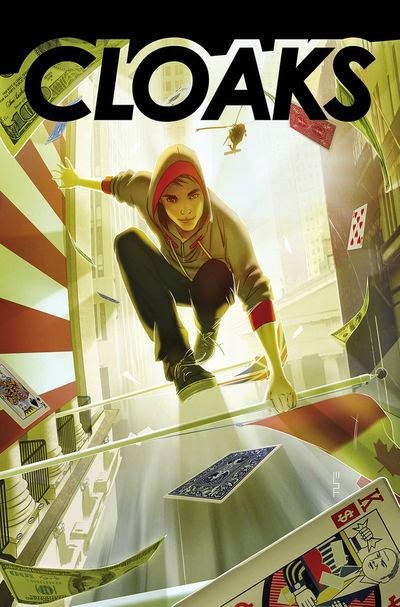 Caleb Monroe and Mariano Navarro's Cloaks is a new four-part miniseries from Boom Studios. I'm really digging what Boom has had to offer in recent months. I think there's been a real renaissance at that company, where they've taken a chance on a wide variety of projects and really upped their profile in the best way possible. While the market's going to be dominated by DC and Marvel for the immediate future, I think all of the really interesting stuff is now getting produced at Boom, or Image, or their elder sibling Dark Horse.

Cloaks basically takes magicians - the performative kind - and transforms them into crime-fighting superheroes, or at least that's where it seems to be headed. The first issue focuses on Adam, a street magician who uses his skills to make a fairly decent profit as a thief. Obviously that career has its risks, and it's his failure to avoid those risks that leads us into the story proper.

It's a decent set-up, and draws the reader in very nicely. Mariano Navarro's artwork is strong and distinctive, without being too showy or experimental. It was, all up, a really enjoyable comic.

While Monroe is the writer of the book it was actually created by David Henrie, star of Disney hits The Wizards of Waverly Place and That's So Raven. It's not difficult to imagine this book as a proof-of-concept pitch for a feature film, and based on this first issue I wouldn't be surprised to see Cloaks in cinemas or on television within the next two to three years. (4/5)

It's September, which means it's time for DC Comics to engage in another line-wide stunt to celebrate the anniversary of the New 52. 2012 featured the zero issues, 2013 featured villain-centric one-shots, and now 2014 ties into the weekly Futures End comic with a series of books set five years into the future of the DC Universe. The lenticular covers are back as well, which is a neat gimmick if you like that sort of thing. I'm actually quite impressed by the 3D advertisement for Conan O'Brien on the back cover. This issue is rather intriguing: while a retired Clark Kent works to plant crops in Ethiopia, a mysterious force grant superpowers to three random citizens in Metropolis - with very different results. It's a rather elegant, graceful one shot that's a tiny bit hard to follow (I assume it's referencing the Futures End weekly) but not so much that it can't be enjoyed. Nice art by Alixe and Sifuentes too. (3/5)

The Architect is threatening one of Gotham's newest buildings, sending Batman up to take him out. I like the Architect - he was a villain created in the rather excellent Gates of Gotham miniseries back when Bruce Wayne was dead and Dick Grayson was Batman. He's nowhere near as interesting here. Quite frankly it could be anyone threatening to destroy the building. Hush is still sticking around like a bad smell too. I swear if he is the main villain this series I'm going to explode with rage. Jorge Lucas' art is a bit too chunky and heavily inked for my liking too. Not a great week for Batman Eternal, really. (2/5)

This issue came as a bit of a surprise, since I honestly thought Batwing finished last issue. This issue effectively works as an epilogue to last month's rather abrupt conclusion, giving Luke Fox a happy ending and showcasing about 30 different cameos of Batwing and Batman Incorporated characters. I am predictably disappointed: the issue feels lazily written, hinges on an obvious plot twist, and fails to do anything interesting and provocative with the character. It's five years later. Anything could have happened. Instead we get a short, simple story that could happen to Batwing right now. At least now this comic can finally be put to pasture. (1/5)

This issue serves to deliver back-story on the current arc, in which Natasha Romanov's handler has been unceremoniously kidnapped and tortured. To understand who's behind it, Edmondson and Noto go back a few years to a Black Widow versus Hawkeye fight in Islamabad. It's beautifully illustrated, as always, and well staged, but it does feel a little like filler. It will probably read like gangbusters in the trade paperback, but on a 20-pages-per-month schedule I kind of expect a little more. (3/5)

This Futures End tie-in is really good, because it achieves several things at once. Firstly, it does take the idea of a "five years later" story in both hands and tells something that's actually quite daring and provocative. Secondly, it follows up on events in the recent Detective Comics annual and helps tie the regular series into this one-shot. Finally, it acts as a neat epilogue to Synder and Capullo's recently-completed "Zero Hour" arc, as Batman is forced to team up with the Riddler to take down another villain. This is great stuff, and easily the best of this week's Futures End books. (4/5)

Captain America is an old man now. I assume that's happened somewhere else - his own series, that Original Sin event going on, who knows? - but Soule doesn't labour the point and simply moves on to tell a story with it. Steve Rogers is the subject of a wrongful death lawsuit, and has to lawyer up - appointed Jennifer Walters to defend him. I really do like how this book is a lot more about being a lawyer who occasionally fights crime than about a crimefighter who happens to have a law degree. It makes a nice shift from the usual Marvel shenanigans. As a side note, I am in love with Kevin Wada's cover illustrations. He just keeps getting better. (4/5)

This is a wonderful miniseries, throwing rabbit samurai Usagi into an adventure against octopus-like aliens who are hell-bent on invading feudal Japan with War of the Worlds style killing machines. Stan Sakai has such a beautiful, simple aesthetic to his artwork, and despite writing a broad, action-oriented story still manages to throw in some lovely little moments of character. Sakai's greatest gift is making this all look so easy: if you glanced at this comic you've probably shrug at its apparently simple, black and white artwork and move on, but the more you look at it all the more impressive it becomes. (4/5)

The plot develops, as do the characters. This is a very solid issue, and I really enjoyed the time spent fleshing out the relationships between the protagonists. They're finally becoming more than cyphers and becoming people I actually care about. I'm not entirely sure what I think of the setting of the series any more, which is becoming harder to put my finger on the longer I read (alien forests, then Aztec temples, now vikings?), but it's intriguing and entertaining - for now that's plenty to keep me reading. (3/5)

Winner of the Week: Usagi Yojimbo: Senso.
Loser of the Week: Batwing, although thankfully this is the last time I'm going to have to write that.
Posted by Grant at 9:15 AM