Star Trek: The Next Generation: "The Enemy" 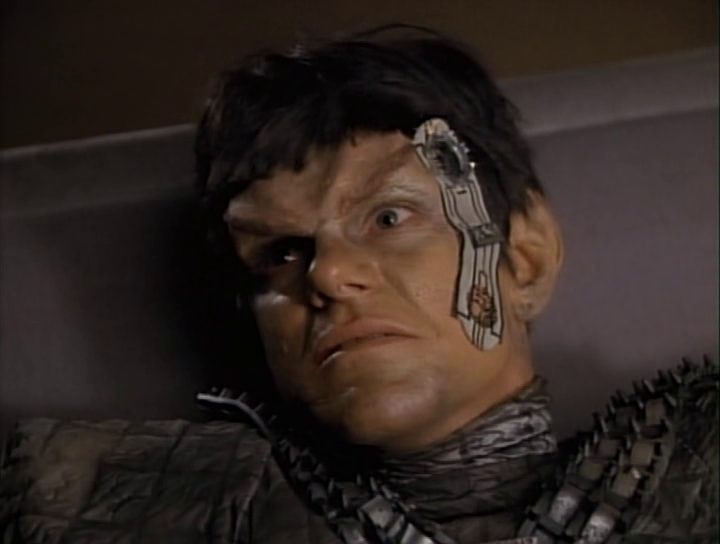 While Lt La Forge is trapped on a stormy planet below, Captain Picard must face up against a Romulan warbird when it becomes clear the Romulan Empire has breached the Neutral Zone.

"The Enemy" is quite exciting on first inspection, since it's pretty much the first proper face-to-face encounter between the Federation and the Romulan Empire that The Next Generation has presented. Sure they made a little cameo at the end of "The Neutral Zone" in Season 1, but since then there has been nothing. They were a source of great drama back in the original Star Trek so it stands to reason they could inspire some great storytelling here as well.

And, in time, they shall. They just don't provide it here. "The Enemy" is a perfunctory episode that doesn't put a foot wrong, but at the same time it does nothing to stick in the mind or particularly impress the viewer. It just sort of sits there, jumping through enough narrative hoops to justify its existence without demonstrating a single piece of ambition anywhere in its 42 minutes.

Okay I'm exaggerating: there's one ambitious element, but I think it's a creative mistake. An injured Romulan is beamed up to the Enterprise. He's badly injured and bleeding to death. Dr Crusher desperately needs to give him a blood transfusion, and the only viable donor is Lt Worf - who hates Romulans and wants this particular Romulan to die. There is something quite bold in this plot thread, since it does indeed end with Worf letting the Romulan die, but there's also something very wrong-headed about it since Worf doesn't strike me as the cold-blooded murdering type. It's easy to see the rationale behind this thread, and it is certainly provocative, but it also damages Worf's character.

The rest of the episode, in which La Forge and a Romulan soldier try to escape the storm-ridden planet before its radiation kills them both, is relatively dull. Certainly the standard "planet hell" set doesn't help matters - it all looks remarkably fake. There is potential in locking one of the regulars up with a Romulan, but in this case the dialogue and the characterisation is woefully under par.

This episode marks the first of four appearances by Andreas Katsulas (G'Kar from Babylon 5) as Romulan commander Tomalak, as well as the Star Trek debut of director David Carson. Carson will go on to direct numerous episodes of both The Next Generation and Deep Space Nine as well as the feature film Star Trek: Generations.

I'm going to give this episode the thumbs down. It's not egregiously awful, but it is remarkably boring to watch. It leaves Season 3 with four good episodes out of seven, and a quality ratio to date of 57%.
Posted by Grant at 7:38 AM