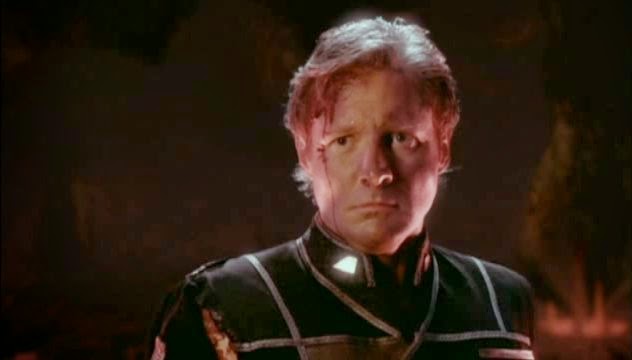 John Sheridan's wife Anna, long thought dead, has arrived on Babylon 5. She wants John to come with her, to meet with the Shadows and hear their side of the conflict that's engulfing the whole galaxy. Delenn doesn't want him to go. A future vision told him to never go there. A vision of Kosh in Sheridan's mind tells him if he goes he will die. And so he goes, because when you're the hero of an epic narrative, heading into the darkness is what you have to do.

"Z'ha'dum" is a hell of a final episode. The previous episode, "Shadow Dancing", provided the more visual, superficial climax, with a mass space battle between Sheridan's alliance and the Shadows. This episode provides the emotional climax. It presents Sheridan with a choice in name only: one way or another, the moment the episode begins we know it will end with him on Z'ha'dum. It's the home planet of the Shadows. It's been mentioned throughout the series in the lead-up to this point. It was foreshadowed in very distressing terms back in "War Without End, part 2". The episode is titled "Z'ha'dum". Of course he's going to go there with Anna, and he knows going in that he isn't coming back.
The episode's early scenes are quite brilliant. Bruce Boxleitner is given the chance to show emotions that haven't been explored with Sheridan before. Grief. Distrust. Betrayal. Love. He plays them forcefully, and J. Michael Straczynski writes some pretty heart-rending conversation between him and Delenn. Did she know Anna was alive? Did she suspect? If she had known, would she and Kosh have told him?

Once he gets to Z'ha'dum, the episode segues into a fairly long and curious conversation between Sheridan and Justin, a middle-aged man with a passing resemblance to Mark Twain. This scene pretty much lays bare much of the back story underpinning the Shadow War and the series in general. It sets up the Shadows and the Vorlons as the real enemies, and all of the other races as their pawns. One side want to hold the lesser species back, the other to force them into conflict and make them grow stronger. It's great to find it out, and it's great to see a science fiction TV series tackle something really quite big and literary as the basis of its story. On the other hand, this scene is the very definition of 'telling not showing'. If the climax of your season requires you to pause and explain it, then something has gone a little awry along the process.

What's even more unusual is that after taking so much time to explain the plot, Straczynski leaves himself no room to show precisely what happens next. We cut from Sheridan pulling a gun and shooting a Shadow to Sheridan, his face bloodied, stumbling to a balcony high over an enormous chasm. All around we see a massive Shadow city, which makes for a remarkable and awe-inspiring moment. I'm torn over how the episode completely skips Sheridan's escape from the Shadows. On the one hand it's bravura storytelling - do we need to see it to know he survived it? - but on the other hand it denies the audience no small amount of entertainment and excitement in seeing him do it. Ambassador Kosh didn't survive a fight with two Shadows. Sheridan somehow managed it, and we never see how.

The episode ends with Sheridan jumping into the chasm, on Kosh's seemingly supernatural command, as the White Star crashes into the city above, levelling it with two 500 kiloton explosives. There's more than a little of The Lord of the Rings about this episode. It's the influence that keeps rearing its head: both have ancient evils returning under the noses of younger civilizations. Both feature Rangers. Both epics climax comparatively early, leaving their third act to the scouring of the homeland. And of course here we have Sheridan falling at Z'ha'dum, which is in no way similar to Gandalf falling at Kha'za'dum. If Sheridan somehow dies but is revived in the next episode, to return Gandalf the White-style to lead the heroes to victory...

There's a narrow line between homage and something a little more than homage, and some episodes I'm honestly not too comfortable with where Babylon 5 sits. I'm particularly uncomfortable when the series' fans start accusing other shows of plagiarising Babylon 5 without checking first that their own favourite series is on firm ground. I'm all for homage, and I'm all for pastiche, but for goodness sake file the serial numbers off more cleanly when you begin.

This is the 15th good episode of Season 3, out of a total of 22. That gives the season a final quality ratio of 68%. Every season of Babylon 5 has been better, which is reassuring. I'd hate to still be watching if it wasn't.
Posted by Grant at 8:19 AM