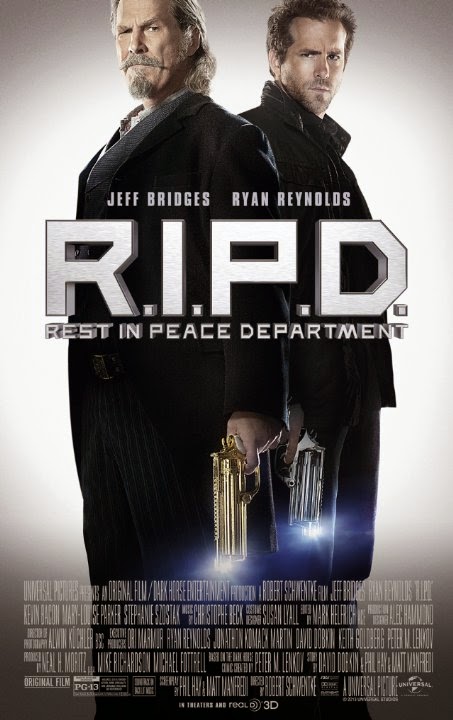 When corrupt Boston police detective Nick Walker (Ryan Reynolds) is murdered by his partner Bobby Hayes (Kevin Bacon), he finds himself with one chance to escape judgement in the afterlife: join the Rest in Peace Department (RIPD), a supernatural police force purging the world of the living from the evil spirits of the dead. He is partnered with a veteran from the Wild West, Roy Pulsifer (Jeff Bridges), and sent back to Boston on a 100-year tour of duty.

R.I.P.D. was released in 2013 and sank like a very loud, embarrassing stone. This action comedy cost Universal Pictures an estimated $130 million dollars to produce, failed to find its audience, got fairly awful reviews, and lost its studio something in the region of $100 million. The critics aren't always right about these things though, and more often audiences aren't either, so I figured it was worth giving the film the benefit of the doubt and watching it for myself.

Is it an unacknowledged gem? Is it a piece of crap? Well...

The answer is, in order, no and no-ish. Certainly critics were too hard on the thing, which is a broadly amiable and rather silly fantasy with comfortable jokes, over-the-top performances and a by-the-numbers storyline without any surprises. Anyone coming out of this one thinking it's one of the worst films of its year is either an exaggerating and delicate flower, or they simply didn't see many films last year. Jeff Bridges channels his noted turn as Rooster Cogburn in True Grit with Roy, and pretty much dominates the entire film. To be honest it's probably worth sitting through the film just for him.

Ryan Reynolds on the other hand is fairly missable. He's not a bad actor - far from it - but he has a bland screen presence that simply hasn't taken with audiences. Given he's headlined two fairly massive flops in recent years (this and Green Lantern) I can't expect Hollywood is going to give him a third shot on a summer blockbuster. Kevin Bacon and Mary Louise Parker are both serviceable in fairly ordinary supporting roles.

As for the film itself, it's abundantly clear that Universal wanted their own Men in Black franchise. Everything about the film screams of that movie. The ordinary cop thrown into an extraordinary world, his old and grumpy partner, the visual effects-heavy comedy monsters, the unflappable boss, the urban setting, the music, the cinematography - this is, for all intents and purposes, a side alley knock-off, the kind of movie you pick up from a Hong Kong street corner for two bucks because you figure 'what the hell', only to get home and find it's a blurry, half-watchable copy.

Special mention should be made for the film's unacknowledged co-stars Marisa Miller and James Hong, particularly Hong - who's always welcome in any movie. When the living see Roy and Nick, they see a leggy blonde in a tight dress and a small Chinese man in a hat, and that simple set-up gives the film most of its good jokes.