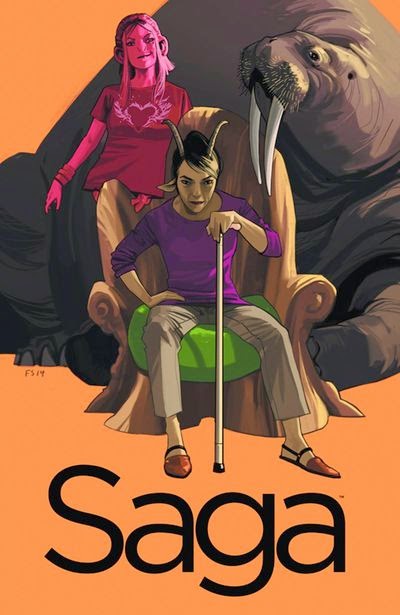 I am struggling to reconcile how I'm feeling about Saga, the hugely successful and widely feted science fiction comic by writer Brian K. Vaughn and artist Fiona Staples. I absolutely adored its first and second arcs, and found my attention flagging a little by the third. Now that we're two-thirds through the fourth arc, I'm finding my opinion of the comic has shifted again. It's trapped somewhere between disappointment and dislike.

I'm disappointed because for a short while this was my favourite comic, and now it's failing to interest me in the same way. I'm beginning to feel fatigued by what seems like a glacial story pace, and a narrative that feels stuck in a rut when it should be barreling forward. I'm feeling dislike because this arc in particular has taken Alana - a character I loved in earlier issues - and made her an actively unpleasant character to be around. She's fallen into drug addiction and is neglecting her husband and daughter, and with the way Vaughn has written it I'm finding it almost impossible to enjoy reading about her any more. I flat-out don't like the person that she's become, and it feels as if she has dragged the comic down into a smaller and smaller domestic spiral as a result. It used to feel imaginative and expansive. Now it feels like a by-the-numbers soap opera.

Now it's possible that the arc's final two issues will reveal this was the intent: Alana is, after all, starring in a soap opera to pay the bills. Maybe it's a deliberate move to have her real life mirror her fake one. I really hope that isn't the case, because it would be precisely the kind of simplistic writing that Saga used to avoid. Vaughn and Staples have earned a lot of goodwill from me with their early issues, but they're cashing that goodwill in at an alarming rate. (2/5)

Under the cut: reviews of All-Star Western, Aquaman, Batman Eternal, Black Science, Doctor Who, The Flash, He-Man and the Masters of the Universe, The Massive, Revival, Silver Surfer and Star Wars: Legacy.

For more than 100 issues Justin Gray and Jimmy Palmiotti have been writing the adventures of scarred gunslinger Jonah Hex. A few recent bumps aside it's been a phenomenal run of gritty violent westerns - once a popular genre of comic book, but one that's long since fallen out of favour. Who knows how long it will be before DC chance bringing the character back, so this is probably the farewell issue to last the next few years. It's great: guest artist Darwyn Cooke draws the hell out of Hex and Tallulah Black's showdown with the main who's been masquerading as Hex during his recent absence. Good action, black humour, beautiful art and engaging dialogue - this comic has had its ups and down, but it's ending on a high. (4/5)

This is the sort of issue that rarely fails to entertain me: the plot was all set up in earlier issues, so all that's left this time around is for Aquaman to have a knock-down fistfight with an angry fish monster on the freeway. This issue features guest artwork by Carlos Rodriguez and Bit: it's not as instinctively pretty as Pelletier and Parson's regular stuff, but it tells the action well and I grew to like it as I read it. Chimera's a solid villain as well. I can see him slowly becoming an irregular antagonist for years to come. (3/5)

For the most part this is a sensational issue, and exactly the kind of cliffhanger-a-plenty thriller that a weekly comic book needs to be. There are plot developments and shocking twists all over the place here, as the key threads of the first act are tied up and the seeds of the second are carefully sown. I'd give this issue five out of five if it wasn't for one drawback: Hush arrives to stink up the place. I mean really. DC keep throwing the character into the mix because his debut story sold hundreds of thousands of copies, and they haven't yet worked out it was the Jim Lee artwork the masses were going for and not Jeph Loeb's badly thought-out, utterly generic villain.

I challenge you to find a Batman fan who would actually list Hush as one of her or his favourite villains. Sure, you might be able to find somebody, but you'd have found somebody who was wrong. And if they're so egregiously wrong about Batman villains, you have to ask yourself what other foolish life choices they've made over the years. I'd watch out for that friend. No, really, I'd seriously reconsider that friendship for your own sanity, because it's only short step from liking Hush to buying Nickelback CDs and putting custard in your trousers because you like the way it slurps around down there. And when they're breaking into your house at three in the morning, because they want to go ice fishing in the desert while wearing Mickey Mouse hats, you're going to turn to your other friends and say 'help me', and they're going to say no, because you were warned because you knew that your crazy friend said they liked Hush. (4/5)

This book really feels like a darker, more brutal version of those old-fashioned American sci-fi shows like The Time Tunnel or Star Trek, where the characters move from place to place on an ongoing journey. It's a great excuse for Remender and Scalera to engage in wonderful flights of fancy - this issue we get space-faring six-foot praying mantises. This issue also continues to deal with the emotional fallout from the first story arc: it's a storyline that gets stronger with every month, and it's transformed Black Science into an SF comic book that more people should be reading. (4/5)

The 10th Doctor's adventure in New York continues, in pretty much the same vein and at the same level of quality as last issue. It has some neat sci-fi ideas, a fast pace and some well-observed dialogue and mannerisms for David Tennant's incarnation of the Doctor. Elena Casagrande's artwork is great as well. I remain slightly doubtful about this book's long-term prospects, however: Titan are simultaneously publishing an 11th Doctor monthly, and a 12th Doctor monthly is out in the next few months. Do we need three comics running simultaneously? To be honest I'd be more interested in Titan running a current Doctor Who comic and then a series of miniseries and one-shots, so that all the past Doctors can get a look-in. (3/5)

This is one of those difficult comics to review, because it doesn't do anything particularly brilliant but at the same time it doesn't trip over and embarrass itself either. It's just sort of there, in that weirdly inoffensive but entirely uninteresting way. The long-gestating "future Flash comes back in time" aspect of this comic is taking way too many issues to come to fruition. He hasn't even reached the present yet and I'm already kind of bored. This is a book that feels like it's headed in a poor direction,. (2/5)

He-Man and the Masters of the Universe #16

Dan Abnett really knows how to work a nostalgia-fest like Masters of the Universe. He balances the childish excitement of seeing a beloved children's toy turn up - in this case Skeletor's villainous henchman Tri-Clops - with some proper entertaining action-adventure that would work well regardless of its 1980s toy-inspired setting. Pop Mahn's artwork is great too. It feels rude to say both writer and artist are slumming it on this title, but they kind of are: it'd benefit DC much more to get these guys on an original title of their own. (3/5)

"Ragnarok" tracks on with this second part, and it certainly lives up to its namesake. The Crash was the global event that all but wiped out human civilization, and now it appears to be starting up all over again. Callum Israel finally gets some answers from Mary, the Kapital does its best to survive as the world turns to chaos all over again, and a final page cliffhanger has me desperate to read next month's issue. I honestly don't remember the last comic that had me so desperate to read another issue. I'm assuming this book is winding up soon - after this storyline I can't imagine Wood taking it any further. (5/5)

Another story arc wraps up in Revival's now well-honed fashion that combines beautiful, character-filled artwork, and really uncomfortable situations and emotions. While Dana continues her investigation with the New York police (and uncovering a truly revolting high society dinner party), her son Cooper has gone missing with her father doing everything in his power to find him. The repercussions of this issue are going to echo for a while through this book. This is dark, unsettling and highly effective horror. (5/5)

Something I really love about Marvel's contemporary books is how openly they've returned to the random superhero team-ups of the old days. This issue sees the Silver Surfer team up with Doctor Strange and the Hulk to stop a sleeping god from dooming the entire planet Earth. It's great to see such a massive, surreal adventure effectively done in a single issue. It's smart, funny, fast and gleefully enjoyable, and what's more it readily sets up Silver Surfer for its long-term future. I love it. (5/5)

I remember back in December 1991, when I had just been drawn back into reading American comic books, Dark Horse published Star Wars: Dark Empire #1. It was a sensational book with good writing, great art and a beautiful Star Wars feel to it. It pre-dated the Special Editions, the prequels, the Clone Wars cartoons, Lego Star Wars, and most of the videogames. It really kick-started a modern interest in Star Wars, and helped to make it an ongoing pop culture phenomenon right at the point it was slipping into a nostalgia-based property. Now we're all 23 years older, and Dark Horse are publishing Star Wars: Legacy #18. It's the final issue before the entire franchise shifts over to Marvel Comics in 2015, and the end of an era. It's a well-crafted finale, tying together the last 18 issues in a satisfactory fashion. I've enjoyed this run, some issues more than others, and I'm enormously impressed as the sheer range of comic books Dark Horse managed to create over the past two decades. (4/5)