Star Trek: The Next Generation: "The Price" 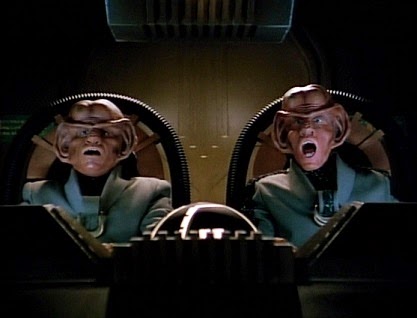 The resource-poor Barzan have discovered the first-ever stable wormhole in their regional space, and plan to auction off its control to the highest bidder. With the Federation as one of several competing bids, the Enterprise acts as host for the negotiations. Counselor Troi begins a passionate love affair with one of the rival representatives - but he may be more than he seems to be.

"The Price" is a fairly significant episode of Star Trek, firstly because it establishes for the first time that the galaxy is divided into four quadrants named Alpha through Delta, and because it introduces the concept of a stable wormhole to the Gamma Quadrant - a story point that will be re-used in a much more prominent fashion in Deep Space Nine. The Delta Quadrant, which is briefly visited here, is the setting of Star Trek: Voyager. Indeed the Ferengi trapped there during this episode pop up again in that series some years later.

Historical significance aside, it's a pretty awful episode. The idea of a stable wormhole is a good one, and the discovery that it's less stable that first suspected is well played out. The negotiations on the Enterprise are incredibly dull, with generic alien delegates, some irritating Ferengi (this is pre-DS9, so all Ferengi are irritating at this point), and a very unlikeable guest star in the form of negotiator Devinoni Rai.

I'm honestly not sure what the production team were thinking with Rai. Troi is in bed with him within minutes of the episode starting, and I spent the entire episode waiting for the revelation that Rai - a secret telepath - was psychically manipulating Troi into liking him. That scene never arrives. Instead she simply made a poor choice of boyfriend. That would be fine - we all make poor life choices from time to time - except Matt McCoy plays Rai in the creepiest way imaginable. He stares at people. He leers. He's smug. Every time he smiles it's freakishly insincere. It throws the whole episode off-balance and turns it into something rather sleazy and unpleasant.

Top marks to Jonathan Frakes and writer Hannah Louise Shearer, though, for giving Riker such a wonderful sense of integrity and humour, whether it's being asked if he's played poker ('Poker...?' he replies incredulously) or being taunted by Rai that he is having sex with Troi and Riker is not (Riker points out Troi is his best friend, so if Rai is making her happy then Riker is happy).

Apart from that, the episode charts a wobbly course between the dull and the creepy: hardly entertaining television. This leaves The Next Generation's third season with four good episodes out of eight. I honestly expected better.
Posted by Grant at 9:25 AM