Doctor Who: "The Caretaker" 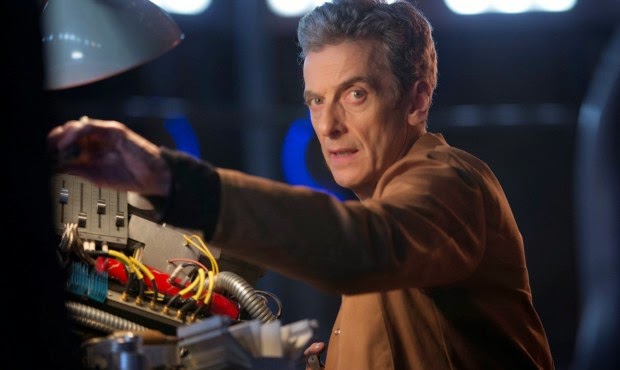 Clara is having difficulty keeping her life with the Doctor separate from her budding romance with fellow teacher Danny Pink. This separation becomes impossible when the Doctor turns up at school as the new temporary caretaker, and an alien menace threatens the safety of the children.

Watching "The Caretaker" is kind of like having two different TV shows, one excellent and one awful, both playing different takes on the same story on separate channels, and then someone sitting next to you keeps changing from one to the other. Some of the scenes work brilliantly. Others are actively painful to sit through. There's no rhyme or reason to it, it's just extraordinarily inconsistent. I have liked some of co-writer Gareth Roberts' earlier work on Doctor Who. I adored his Season 5 episode "The Lodger", which demonstrated that an all-out comedy can work in Doctor Who, but was fairly lukewarm on his Season 6 follow-up "Closing Time" and really didn't like his Season 3 episode "The Shakespeare Code". I do adore his 1990s novels, published by Virgin Publishing Ltd, and keep wishing he'd bring the qualities he demonstrated back then to the scripts he's writing now. To be fair to him, he sometimes does - just not consistently enough for me to properly enjoy it.

There's much that works. The opening scenes are briskly paced and genuinely funny. There is a great scene where Danny finally meets the Doctor, and it's a beautiful angry exchange with Danny nailing the Doctor's true nature from the get-go. The scene is badly under-motivated, however, and the preceding scenes in the episode don't deposit enough character development to be properly exchanged for a scene like this.

I did really like the introduction of potential new companion Courtney (Ellis George), as well as the implication that the Doctor may start taking trips with her behind Clara's back. I hope this gets followed up on in future weeks.

Sadly there's also an awful lot that doesn't work. The monster of the week is pretty dreadful, and while I'm not normally one to criticise Doctor Who for shoddy and unconvincing monsters this one did seem particularly weak. The episode's climax is positively ridiculous, with Danny undertaking a bizarre super-heroic leap over the killer robot like an Olympic athlete. The episode is packed with jokes and comedy bits, and to be completely honest the majority of them are actively painful. The best analogy I can think of for this episode is rifling through a bucket of waste for nuggets of gold. There's gold here - genuinely good, funny writing - but its smothered in rubbish.

The episode's most egregious aspect is its music. I've been ambivalent over Murray Gold's compositions since the series returned in 2005: he's produced some outstanding pieces, and contributed to some great moments, but he over-composes terribly and is seemingly incapable of letting a scene speak for itself with a bombastic orchestra soundtrack blaring from behind. His music is particularly inappropriate here, where half of the episode is smothered with loud, abrasive "hey ho this is a comedy episode" music. Take the music out and half the comedy scenes that don't appear to work would probably work just fine.

I find myself entirely on the fence with this one. I want to give the thumbs-up to the bits I liked, and the thumbs-down to the bits I hated. In the end I'm going to just give it the tick of approval. Just have a smartphone ready so you can surf the Internet during the tedious bits.