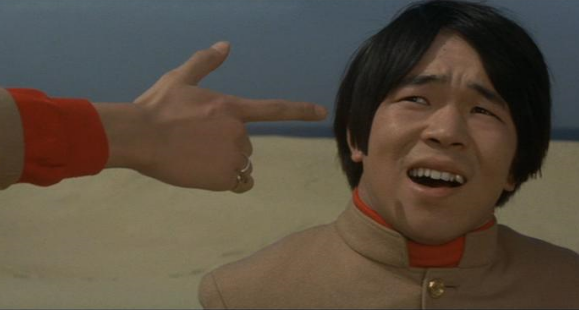 Three young men go swimming at the beach. When they return to their belongings, their clothes have been stolen by Korean refugees. Putting on the clothes left behind, the three men are themselves confused for Korean refugees and go on the run from the police, the Koreans and a creepy pimp with an eye patch. Then it all happens again, Godot-style.

Nagisa Oshima is a pretty legendary filmmaker, primarily for his provocative sexual dramas In the Realm of the Senses and Empire of Passion. They were produced by French distributors in the 1970s, because the Japanese censors refused to allow Oshima to release them locally. He later directed several other widely acclaimed films including Merry Christmas Mr Lawrence and his final film Gohatto, about homosexuality among the samurai.

Three Resurrected Drunkards pre-dates all of those films. It's a 1968 comedy, styled very self-consciously in the vein of absurdist English-language films such as A Hard Day's Night and Head. At times it gets head-scratchingly weird, but it also makes a fairly significant step beyond its influences and presents a pretty confronting indictment of Japanese racism against Koreans.

The leads are tremendously appealing. Just like A Hard Day's Night starred the Beatles and Head the Monkees, so Three Resurrected Drunkards stars three members of the Japanese pop combo the Folk Crusaders. They are Kazuhiko Kato (named "the big one"), Osamu Kitayama ("the small one") and Norihiko Hashida ("the smallest one"). They are delightful to watch, and pretty guarantee the film is an entertaining experience.

Another part of the core appeal of this film is its second half. We've already seen our three protagonists get set up, captured by the runaway Koreans and executed. When they run through those events all over again, they're constantly aware that they've done all of it before. They deliberately make better choices, remember when to run and when to hide, and generally critique their own experience. At one stage a character insists on hanging around because he knows a naked woman is about to pop up.

Despite all of the loose narrative and play, and the absurdist comedy, Three Resurrected Drunkards is a film seething with anger. Oshima's rage sneaks out from behind, striking the viewer at the most unexpected of moments: anger at Japanese racism towards Korea, and anger at South Korea's participation in the Vietnam War. A repeated visual motif throughout the film depicts the three titular drunkards playfully simulating Eddie Adam's famous photograph of General Nguyen Ngoc Loan executing a Viet Cong prisoner. It's provocate from the start, and only becomes more uncomfortable as the film goes on.

This is such a striking film, and one wilfully difficult to pin down and categorise. How do we describe it? Agit-prop absurdism? Angry comedy? Whatever it's place in the world of screen comedy, it's definitely memorable and absolutely fantastic.
Posted by Grant at 4:59 PM