Star Trek: The Next Generation: "Who Watches the Watchers" 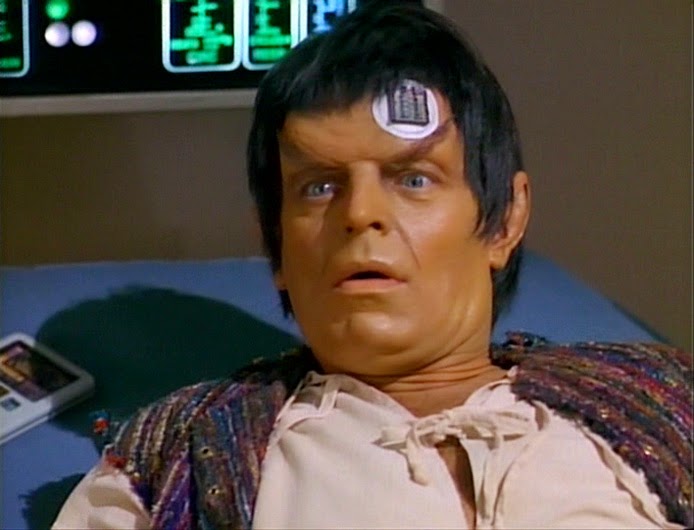 Who watches the watchers? We do, which is a bit unfortunate because the watchers turn out not to be outrageously watchable at all. This isn't the worst episode of The Next Generation, but it's certainly not a very good one.

The Enterprise travels to a remote low-technology planet, where a Federation survey mission is secretly observing the local population. When a holographic generator explodes, members of the survey team are critically injured and their presence on the planet is exposed to the superstitious natives.

There's something very slightly creepy about people setting up a secret observational hide so that they can watch other, less technologically advanced, people go about their day-to-day lives. Is this really the best method of doing this? What do they gain from sitting inside a secret room behind a holographic cliff that they couldn't get using a starship's systems from orbit? Of course they're hiding because no one wants to break the Prime Directive: that old chestnut, responsible for - I'm just guessing here - precisely no brilliant episodes of Star Trek ever.

The bottom line is that "Who Watches the Watchers" is a crushingly ordinary and rather boring episode of unintended first contact. While it has plenty of elements that show promise - particularly Riker and Troi going undercover to convince the local Mintakans that nothing suspicious is going on - none of those elements pay off in the manner that they should.

The Mintakans are an oddity: they're apparently an early developing cousin to the Vulcans, and certainly they have Vulcan-looking ears and eyebrows, but there's no explanation delivered for how Vulcans have independently developed in an unrelated star system. It's always a worry when a more interesting story sits under the writers' noses, but they fail to see it. The guest cast aren't particularly strong either. Ray Wise is remarkably wooden - I assume he was disinterested in this role, given his better performances elsewhere.

Again, this isn't a bad episode, but it's a deeply underwhelming one. It's oddly beloved by many Star Trek fans, which perplexes me a little. Still, it's Season 3's first down note, giving us a quality ratio so far of 75%: three out of four.
Posted by Grant at 8:37 AM