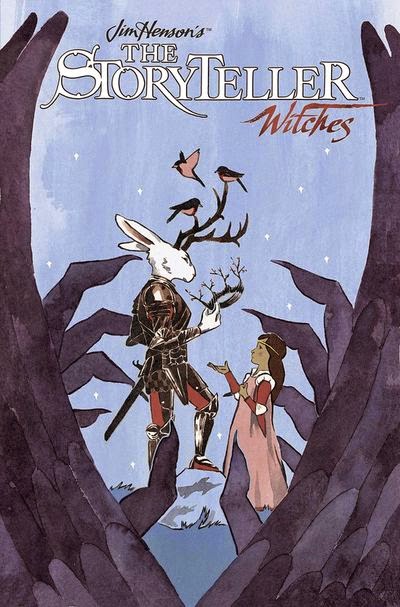 Some film and TV properties seem like shoe-ins for comic book adaptations. Doctor Who has been in publication as a comic book or strip since 1964. Star Wars has repeatedly proved itself rich fodder for numerous ongoing monthlies and miniseries. Comic shop shelves are littered with tie-in product of various descriptions: Adventure Time, He-Man and the Masters of the Universe, The X Files, Transformers, Aliens, Predator... it just rolls on and on. Then from time to time you get a really weird tie-in. Jim Henson's The Storyteller has to be one of the weirdest.

I adore The Storyteller, which was a late 1980s anthology series created and produced by Jim Henson. The titular Storyteller, played by John Hurt, would tell a traditional European folk story or fairy tale, with each episode dedicated to the telling of a different myth. I'm not sure I see the creative point of turning that into a comic book. There's a benefit from brand-name recognition sure, and I suppose anything that gets people buying a comic book is potentially a good thing, but beyond that it's nonsensical.

Jim Henson's The Storyteller: Witches is a four-issue miniseries, with each issue presenting a self-contained one-shot telling a folk story. This first issue, with story and art by S.M. Vidaurri, tells the story of "The Magic Swan Goose and the Lord of the Forest". It's a stunning piece of work, told in a very visual and experimental style that's reminiscent of Dave McKean without really apeing him in any way. It's literature, clever and utterly beautiful. And this is where the Storyteller connection actually chafes. Hurt's Storyteller is nowhere to be seen, save a subtle silhouette on the final page, and the bottom line is that this book can and should be able to stand on its own merits.

Like all Archaia books it's impressively packaged with a cardstock cover and high quality paper. It's an absolute must-read, quite frankly - I just despair that it needed the corporate tie-in, however high quality, in order to get produced. (5/5)

Under the cut: reviews of Batman and Robin, Batman Eternal, Batwoman, Daredevil, Eye of Newt, The Last Broadcast, Miles Morales: The Ultimate Spider-Man, Multiversity, Thor: God of Thunder, The Wicked + the Divine and Wonder Woman.

I rather liked this Futures End tie-in, because it actually riffs quite capably on plot threads from both Batman and Robin and "Zero Year", and told a fairly believable one-shot about Batman and a new Robin. Whether this Robin is a deliberately foreshadowing of whoever takes on the role at year's end is something I doubt, but as a one-off alternative idea it's rather cool. Unlike the other previous Futures End books this month, this is one I can actually imagine getting published in five years' time. (3/5)

Attention all Stephanie Brown fans: this is your issue. As I am also a big fan of Stephanie Brown, aka Spoiler, aka Robin, aka Batgirl, this issue was wonderfully entertaining. We've been getting fed Stephanie's new life and first adventure in dribs and drabs - here it finally explodes (literally in some moments) and gives us the proper debut of Spoiler as Gotham's latest teen vigilante. A few short subplot keep the overall plot moving nicely, and the Cluemaster's plot gets tied in rather nicely. All up, a pretty solid issue for this uneven, meandering weekly. (4/5)

I've been quite underwhelmed with Batwoman in recent months, but this issue actually intrigues and excites in equal measure. It posits a future version of the characters that spins out of the current present-day arc, but also suggests plot developments that would actually be cool to read about. Alice, Kathy Kane's insane super-villain sister, is now a super-hero fighting the vampire that used to be Batwoman with the aid of a group of DC characters including Etrigan the Demon, Clayface and Ragman: that's a team I'd read regularly - and I do wonder if DC is prepping it as a replacement for Batwoman in the comic months. (3/5)

Waid and Samnee knock things out of the park with this perfectly honed Daredevil issue. It's a great jumping-on point for new readers, as it introduces Matt Murdock and girlfriend/law partner Kirsten McDuffie, advances their relationship nicely and still finds room to tell an insanely creepy horror story at the same time. Kilgrave the Purple Man is back with his insidious mind control powers, and a development I hadn't anticipated with effects that he clearly never anticipated. Funny in parts, thrilling in parts, and beautifully illustrated. This is one of the best superhero comics on the market. (5/5)

This final issue of Eye of Newt runs along brilliantly, with lovely art by Michael Hague and a great sense of mythic fantasy. It even throws in a few surprises that I didn't see coming, as Newt desperately races back to the magical door that will let him return to the real world. Then something weird happens. The book reaches its final page and just slams into a narrative wall, as if the author screaming out "THEEND!!!" and ran out of dodge as fast has he could manage. It's a terrible disappointment, because the rest of this miniseries had been so wonderfully entertaining, and at the very last page it's all brought to ruin. If and when Dark Horse collect this together, I would desperately urge them to give Hague another three pages and give the book the conclusion it deserves. As it stands simply isn't good enough. (3/5)

This is one of those comic miniseries (it's seven issues in total) that gets better with each issue, and more addictive to read. I am crawling up the walls with anticipation for issue #6 because this one ends in such a "wait, huh, what the hell?" fashion. I have praised Andre Sirangelo's twisting non-linear script, but it's really worth also praising Gabriel Iuzmarek's wonderfully muted and vaguely manga-esque artwork. Visually this has been a great comic: easy to read, thrilling to look at, difficult to properly comprehend - in a good way. No, in a great way. This is one of my favourite comics getting published at the moment. (5/5)

Oh this book is so, so slow now. It's always run at a highly decompressed space, but this particular arc feels like I've been wading through treacle for a year. The art remains highly expressive. Bendis has a wonderful gift for dialogue and character. I love how he's introduced Maria Hill into the narrative as a New York police detective. Now for the love of all that is holy up the panel-per-page count and give this book some vague sense of momentum again. At the moment it just feels like loose filler in between cliffhanger story beats, and it deserves more than that. Much more. (2/5)

The Multiversity: The Society of Super-Heroes Conquerors of the Counter-World #1

Interdimensional war breaks out between parallel Earths in this second issue of Grant Morrison's The Multiversity. It's all basically a big excuse for Morrison to play around with as many old-fashioned DC characters and properties as he wants, as well as collaborate with his favourite artists at the same time. This issue teams him with penciller Chris Sprouse and inkers Karl Story and Walden Wong to tell a very fast-paced adventure for the Immortal Man, the Blackhawks, Green Lantern Abin Sur and Doctor Fate. It's all wildly entertaining stuff, and points to some pretty awesome long-term plot developments as the multi-universe saga continues. It's a little pricy at US$4.99 though, but I suppose the extra pages are giving Morrison much-needed room to tell his story. (4/5)


Some days you just can't keep a comic book running. Marvel's ongoing addiction to first issues strikes again, and this absolutely fantastic Thor monthly limps across the line for an over-priced, slightly longer final issue to set the stage for an all-new Thor #1 next month. I am genuinely sad to see this book go, even if the same guy is writing the relaunch next month. There's been a particularly epic, grand vibe to the book that really appealed to me, as well as its clever use of Thors from both the ancient past and the distant future. The storyline was pretty much wrapped up in issue #24, so this issue is part epilogue but mostly just wheels circling to grab a little extra cash. Not bad, but unnecessary. (3/5)

In a world where gods walk the Earth like pop superstars, one mortal woman (and immortals fangirl) tries to find who has framed Lucifer for murder. This issue, which feels a lot more confident than the last, is an absolute hoot: the gods all seem visibly based on actual pop musicians, and part of the fun is recognising which god is based on which singer. I was worried last month that this book was losing its way very quickly, but thankfully it all seems back on track now. McKelvie's facial expressions remain a highlight; he's a master of small emotional moments. (4/5)

Winner of the Week: The Storyteller: Witches, or The Last Broadcast.
Loser of the Week: Miles Morales: The Ultimate Spider-Man.
Posted by Grant at 5:23 PM