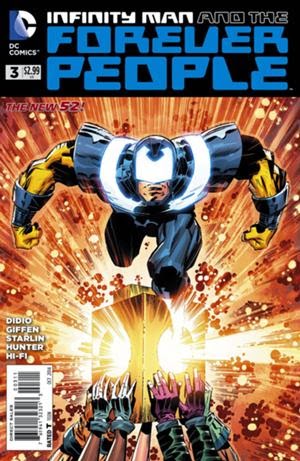 With August we hit the end of the third year of DC's New 52 initiative. One wonders how long they're going to keep referring to it as "new". Or indeed "52", given they haven't been regularly publishing 52 monthlies for a while now. The big launch of the month was Grant Morrison's parallel universe maxi-series Multiversity, which launched with a very solid 90,551 units. At US$4.99 an issue it was far and away DC's highest-earning comic for the month. Last month there were four launches: Grayson, Star-Spangled War Stories, Teen Titans and New Suicide Squad. How did each book fare in its second month?

Star-Spangled War Stories is officially the New 52's least successful monthly book ever. In July its debut issue only sold 18,762 copies. In August it only sold 11,724, down almost 38% and beating previous worst-selling second issue Green Team: Teen Trillionaires by 2,600 copies. Discounting the original September 2011 launch, which arguably had unrealistically inflated first issue sales, the average second issue drop for a New 52 monthly is 28% - so not only did this book launch poorly it then promptly crashed ever harder.

Grayson #2 had a 30% drop with its second issue, down to 56,483 copies. That's actually pretty reasonable for what is essentially a relaunched Nightwing. It's still 29% above the last issue of Nightwing from May. The relaunched Teen Titans only dropped by 22% (40,687 copies), a softer than average fall that suggests this new iteration might have some legs to it. New Suicide Squad dropped by the same proportion, to 38,477 copies. Three reasonable launches, and one absolute disaster: it could be worse.

How are 2014's other freshly launched titles going?
So, all up, what books are sitting in the danger zone? Books coded 'orange' are selling between 20,000 and 30,000 copies a month, so there's a good chance DC is keeping a very close eye on them. Books coded 'red' are selling less than 20,000 copies and are in immediate risk of cancellation. Books coded 'black' are dead in the water with less than 10,000 copies shipped. If a book has already been cancelled, I've highlighted it in bold. Of note is that all Green Lantern titles bar Green Lantern itself have now crept into the danger zone; that 'Godwar' crossover can't come soon enough.