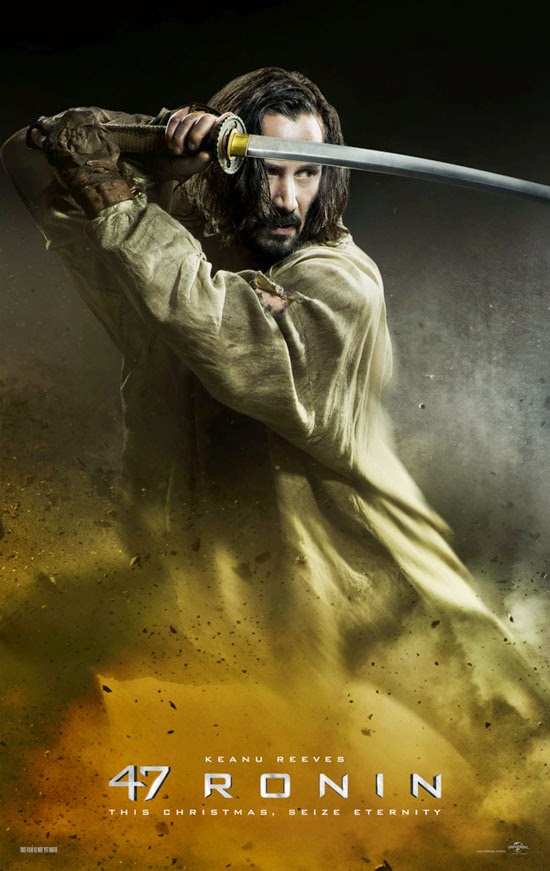 As popular saying goes: to know the 47 ronin is to know Japan. I can take it then, from his 2013 fantasy film 47 Ronin, that director Carl Rinsch does not, in fact, know Japan.

The tale of the 47 ronin is both a popular legend in Japan and, at least in part, a historical account. The story goes that one Japanese daimyo, Lord Kira, goaded and offended another, Lord Asano, into striking him in the emperor's presence. Rather than be executed on the spot for his crime, Asano was given the opportunity to commit suicide by a traditional Japanese fashion. Forty-seven of Asano's retainers, led by a samurai named Oishi, swore revenge on Kira. They waited for two years, put their affairs in order, and then stormed Kira's castle and murdered him. They then honourably surrendered themselves to the emperor - who had forbidden any attempts at revenge - and forty-six of them then committed ritual suicide as their master had done (one, considered too young by the emperor, was excused).

It is a critical story in Japanese popular culture, rich in codes of honour and the nobility of sacrifice, and it's no surprise that it's formed the basis for a number of feature films over the decades. It's been filmed at least six times in Japan, notably by Kenji Mizoguchi. You can even travel to Tokyo and see the graves of the forty-seven at the Sengoku-ji temple.

Carl Rinsch's film re-tells that story, and to a large degree it must be said that he tells it with reasonable faithfulness. Asano is there, as are Kira and Oishi, and no punches are pulled when it comes to the ritual suicide end of the storyline. What is added, however, are mythological creatures, bird-like demon monks, a witch that can transform into a fox and a dragon, magical faceless samurai, improbable geography, and Keanu Reeves.

It really is quite peculiar. I suppose the equivalent would be if the Japanese decided to make a film about the gunfight at the OK Corral, only threw in some alien spaceships or a giant monster to spice things up a little. It's not enough to cause genuine offence, I suspect, and even if it was I'm not sure it's my place as an Australian watching an American film about Japanese events to be the one who is offended. It is damn odd though, like painting an oil landscape and then showering it with glitter. It's odd because these were real people, albeit ones progressively fictionalised over centuries of tellings and re-tellings. I've stood beneath the statue of Lord Asano, and I've visited the graves of his loyal retainers.

Arguably more disruptive than all of the fantasy creatures is the presence of Keanu Reeves. I've always had time for Reeves, who has demonstrated a strong screen presence over the decades and delivered a string of rather solid performances - albeit along a relatively narrow range. I liked him in Bill and Ted's Excellent Adventure, Speed, The Matrix, Constantine and a few other films. He's got unexpectedly solid comic timing, and more simply he looks really good on camera. He is similarly solid here, making his first big Hollywood blockbuster in several years. I'm just not sure he should be there.

The film falls dreadfully into that racially dubious cesspit where indigenous people struggle to fix their problems, but a white foreigner can stride in and solve their problems for them. More than once 47 Ronin reminded me of Edward Zwick's The Last Samurai, which suffered almost exactly the same problem. It's Avatar all over again. Oishi leads a band of 47 highly trained, quite lethal soldiers, yet it's the outcast servant who pretty much saves the day. There's a half-hearted attempt to sell Kai, Reeves' character, off as a man of mixed descent - half-English, half-Japanese - but that just feels like a concession to make things slightly less embarrassing. On the other hand I did appreciate that the Japanese characters were cast with Japanese actors; this is something Hollywood often neglects to do. Tadanobu Asamo, Hiroyuki Sanada and Rinko Kikuchi are all solid in their roles, although I'm pretty sure Min Tanaka was delivering his lines phonetically as Lord Asano. There was something slightly off about his delivery.

In terms of narrative nuts and bolts, 47 Ronin is by no means a terrible movie, but it is ultimately a terribly ordinary one. You can see all the bits that should work, and to an extent many of them do - they just don't come fast enough, and they feel as if they're in the wrong movie. All things considered I'm kind of scratching my head over this one: ill-advised, poorly structured, sort of entertaining and sort of inappropriate all at the same time. I wasn't bored - does that qualify as praise?
Posted by Grant at 5:00 PM