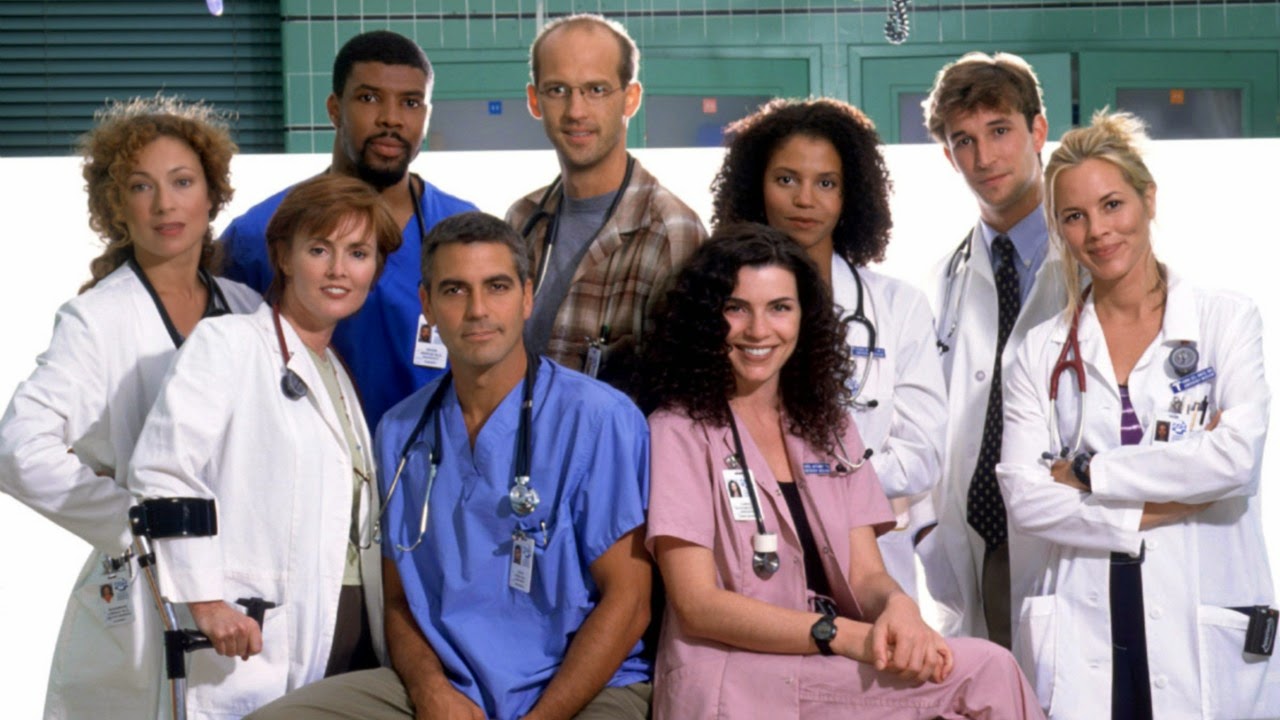 It's quite difficult to get nostalgic about ER. This enormously popular and commercial successful NBC drama may be celebrating its 20th anniversary today, but it ran for 331 episodes over 15 seasons and only ended in April 2009. There simply hasn't been enough time to indulge in nostalgia.

It's still one of my favourite TV dramas. It was originally written in the 1970s as a feature film script by novelist and screenwriter Michael Crichton, who was a doctor before he turned to full-time writing. The script lay fallow for almost 20 years before Steven Spielberg showed interest in it. While developing the ER film, Crichton told Spielberg about the novel he was currently writing - a sci-fi thriller involving cloning dinosaurs. The notoriously fickle Spielberg jumped ship and bought the rights to Jurassic Park, but he didn't entirely abandon ER - he had his production company Amblin Entertainment turn it into a weekly drama instead.

ER certainly hit the ground running. It debuted one day after a rival medical drama, Chicago Hope (happy birthday, by the way), but despite critical expectations that ER would run second it instead completely dominated the 1994 television landscape. More than 19 million people watched the first season across America. The second and third seasons got 21 million viewers and the fourth an astounding 30 million. The most popular episode of all, Season 2's "Hell and High Water" - in which Dr Doug Ross saves a boy from drowning in a storm drain, was seen by more than 48 million people. It was the highest-rated TV episode since Dallas.

Why was this show so successful? Who do I continue to love it so much? There are a few reasons why.

It had a proper ensemble.
A lot of TV dramas will focus on one or two lead characters and surround them with supporting players. ER never did that: it started with an ensemble of six and for 15 years it kept a strong balance of characters. Even when members of its cast became particularly famous or popular, such as George Clooney, it always resisted the temptation to lose that balance.

It never slowed down.
Balancing six characters week in, week out, meant telling at least six stories every episode. ER revolutionised the pace of American TV drama. It quite simply never stopped. It jumped from plot to plot with startling rapidity, employing extremely bold Steadicam shots on long takes. Because the camera moved around so much they had to build four-walled replica sets rather than the then-traditional three-walled sets. So much more happened on ER than on other TV shows at the time. Plenty of shows do this now. None of them did it this effectively then.

It never stopped to explain.
The kiss of death for a show this fast-paced would be to stop and explain what the doctors were doing, so ER's producers figured why bother? Medical jargon came screaming in thick and fast in every trauma, only pausing to clarify what procedure was being undertaken if it was actually relevant to the story. It successfully realised that you didn't have to sacrifice medical accuracy for the viewer's sake. Of course this much technical dialogue was hell on the actors (check out how many times sneaky-bastard Clooney looks down at his hands when diagnosing patients) but the end result was remarkable.

Speaking of awards, over its 15 seasons ER was nominated for 124 Emmys, winning 22. It's the second-most nominated series in Emmy history after Saturday Night Live, and the only dramas to win more Emmys were Hill Street Blues and The West Wing.

It wasn't afraid to experiment.
As the series went on, its producers didn't think anything of setting an entire episode on a road trip to California so Doug Ross (Clooney) could bury his father. The Season 4 premiere was performed live to air; given the USA's different time zones they actually performed it twice in one night. A later episode was told entirely in non-linear fashion, showing the results before the opening credits and then tracking back scene by scene to show the cause. Another went backwards through the treatment of a university professor with ALS (James Woods), showing how he had encountered various staff of the hospital over the years. This wasn't a show that rested on its laurels - it always tried new things.

It used its soapbox.
And what's the point of everybody watching if you don't have anything to say? ER used its popularity to showcase genuine social issues in contemporary America: medical insurance and medicare, gun and gang violence, hospital overcrowding, breast cancer, homelessness. It rarely felt preachy and it always generated interesting stories. One lengthy arc saw Drs Kovacs (Goran Vijsnic) and Carter (Noah Wyle) travel to the Democratic Republic of Congo: if Americans knew anything of the internal strife and civil wars in that country, they didn't learn it from the nightly news.

It was about characters.
In the end, any TV drama rises and falls on the merits of its characters, and ER had some of the best. The cornerstone of that was Dr John Carter (Noah Wyle), who begins the series as a young and naive intern and ends it a senior resident at the hospital. In between he gets older, matures, makes mistakes, saves lives, loses lives, goes to Africa, finds love and loses it, and loses both kidneys. I'm not sure there's been another case in television where one actor has been allowed to develop and change a single character over 15 years. It's a remarkable achievement, and if Wyle did nothing else in his life (and he has, obviously) he should be remembered as one of US television's greats.

So it might not be time to wax lyrical about ER like some barely remembered old thing, but it's always time to remember just how strong and exceptionally well-made this series was. I keep holding out hope that NBC might revisit it in some way: I'd love the occasional TV movie letting me know how Carter's getting along at the very least.
Posted by Grant at 11:09 PM