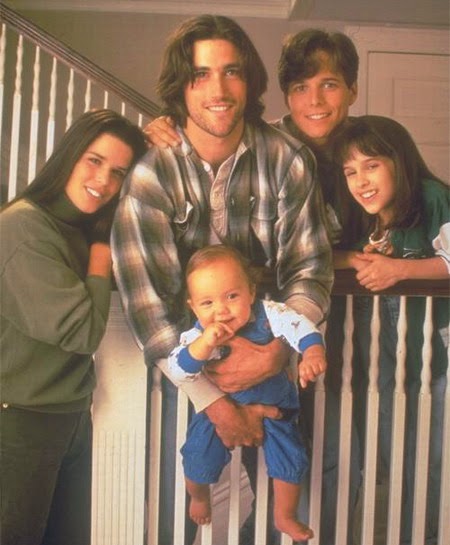 20 years ago today the Fox Network unleashed Party of Five upon the world, launching what is probably still the world's most depressing teen drama ever. The five Salinger siblings were orphaned from the outset, and then collectively struggled through six seasons of drug abuse, teen pregnancy, alcoholism, domestic violence and cancer. If there was a misfortune to make these kids miserable, it happened to them. If there was a mistake in life choices for one of them to make, he or she would make it. If there was an opportunity for the precocious younger sister Claudia (Lacey Chabert) to pout and whisper 'I am so ashamed of you', she would take it.

It was, all things considered, absolutely dreadful television. On the other hand the constant cavalcade of regret and misfortune became oddly addictive. I'm not ashamed to admit I watched Party of Five. Indeed for a few seasons at the beginning I was completely addicted. It was the 1990s' most exceptional car-crash television, for a while even topping even the soap opera histrionics of Melrose Place.

All that? We're only up to episode 11. This thing ran for 142 misery-soaked, recrimination-heavy episodes of hurt and self-loathing. We haven't even reached Bailey's girlfriend dying of a drug overdose, or Charlie being accused of burning down his workplace, or Julia being sexually harrassed by her teacher, or her teen pregnancy and miscarriage, or Charlie's girlfriend's suicide attempt, or Bailey's alcoholism, or Julia ignoring Claudia so much she doesn't even notice when Claudia is rushed to emergency with appendicitis, or when their absentee grandfather goes blind and gets cancer, or when Julia's boyfriend turns out to be racist, or when her best friend commits suicide, or when Bailey gets drunk behind the wheel and nearly kills his girlfriend and is so remorseful he tries to drink himself to death, or when Charlie gets cancer, or when Julia gets married to a guy who spends all her money and cheats on her, or when Bailey's girlfriend Sarah's biological mother dies in a plane crash, or when Julia's next boyfriend becomes abusive and hits her, or when Charlie and Bailey fall out and go to court over custody of little Owen, or Owen's learning disability, or when someone tries to rape Claudia in her senior year, or... you get the idea.

Seriously, the most depressing family ever. You've never invite them to parties. Somehow this misery pornography ran for six seasons, and even gained a brief spin-off for Jennifer Love Hewitt. I do wonder, now that the series is 20 years old, quite what happened to Charlie, Bailey, Julia, Claudia and little learning-disabled Owen. Did Charlie's cancer come back? Did Julia finally find a non-appalling person to date? Is Bailey still in recovery or has he since died of liver failure? Wherever they are, and whatever they're doing, only two things seem certain. One: it's bound to be miserable. Two: Claudia is so, so ashamed of them.
Posted by Grant at 5:03 PM