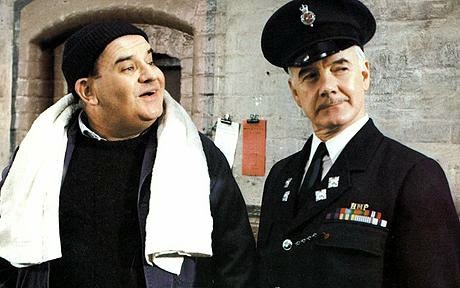 Happy 40th anniversary to Porridge, one of the greatest television comedies ever produced - and one of the few with a pretty solid claim to being the absolute best comedy of all time. It would be ridiculous to actually pick a single-greatest comedy series, but if you were going to at least write up a shortlist then Porridge deserves to be on it.

Porridge originated in an anthology series, Seven of One, commissioned by the BBC to test out potential comedy formats for Ronnie Barker. Each episode allowed Barker to play a different character in a different situation, and whatever format seemed the most popular would be subsequently expanded into a full series. It was Dick Clement and Ian La Frenais' "Prisoner and Escort" that was deemed the most successful. It followed career criminal Norman Fletcher (Barker) on his way to prison under the supervision of guards Mackay (Fulton Mackay) and Barrowclough (Brian Wilde). The subsequent series, named Porridge after a slang term for a term in prison, premiered on 5 September 1974 and ran for three seasons, plus a feature film and a one-season spin-off titled Going Straight.

I adore this series. It's absolutely one of my favourite TV programs, regardless of genre. It's one of those rare cases where a subject matter meets the perfect writers, whose scripts are then performed by the perfect actors, resulting in episodes that never gets boring no matter how many times you've seen them.

Slade Prison is a brilliant setting for a sitcom. There's rarely a need for external shooting or new sets, because by-and-large the characters aren't able to go anywhere. The harsh realities of prison life give the series a leavening effect, enabling comedy to be mixed with moments of introspection and melancholy. We're not talking Oz here, but the overwhelming despair of being trapped in a prison without simple luxuries or freedom is something that runs like an undercurrent beneath the surface. Few sitcoms before or since have boasted such depth. (Just check the opening credits: no music, just scenes of prison doors being slammed shut while a voiceover sentences Fletcher to five years' gaol.)

With no ability to escape, and no freedom in sight, Fletcher's life boils down to what Clement and La Frenais referred to as 'little victories'. The subject matter for most episodes is remarkably petty: retrieving a stolen tin of pineapple chunks, or feigning illness to get a day's relief in the prison infirmary. They're played in such an entertaining fashion that the small scale is irrelevant. They're major for the characters, and so they feel major to us as well.

All good comedies rise or fall on the strength of their cast of characters, and again Porridge excels. I honestly don't think Ronnie Barker had a better role than Fletcher. His cellmate, the naive Lennie Godber, was immensely likeable, and wonderfully played by Richard Beckinsale. It's a tragedy that he died so suddenly in 1979, as he would probably have been one of Britain's most enduring comedy stars within another 10 years.

On the other side are the two main prison guards. Brian Wilde did wonders as the doddering, overly trustful Mr Barrowclough, but it was Fulton Mackay as the dour, suspicious Mr Mackay (the name was coincidental) who pretty much cemented Porridge as one of the all-time greats. The relationship between Fletcher and Mackay is comedy gold: one constantly watching the other like a hawk, waiting for the smallest of slip-ups, the other doing everything he can to get away with anything that will get on his nerves. Like all adversarial relationships, there's a conflict but also an unspoken level of respect. List the 10 funniest scenes of the series, and almost all of them will involve Fletcher and Mackay.

Porridge is a creative high point for pretty much everybody concerned with making it. Barker was never funnier, Clement and La Frenais never wrote anything better. It's even widely available on DVD, so if you've never experienced it you don't really have an excuse not to.
Posted by Grant at 5:01 PM