Doctor Who: "The Roof of the World" 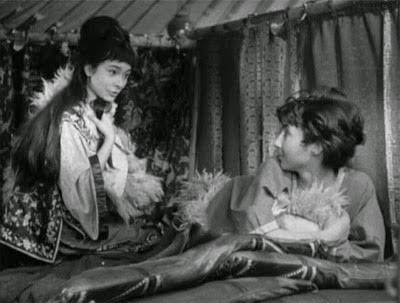 The TARDIS has materialised in the Himalayas in the year AD 1289. The ship has sustained damage that will take days to repair, and without heating the Doctor, Susan, Ian and Barbara are likely to freeze to death within hours. As the sun sets they are ambushed by a group of Mongol warriors, but saved by their leader - the Venetian explorer Marco Polo.

The historical story was a mainstay of Doctor Who's first four seasons, allowing viewers to see and learn from famous historical events and personalities via the Doctor's travels. Perceived wisdom among Doctor Who fans was that these serials were not as popular with viewers as the science fiction adventures, however viewing figures and appreciation index scores of the time paint a very different picture. When they were retired in 1966, it was likely because the production team wanted to focus more on science fiction rather than any desire on the audience's part.

The historicals were the kind of serials that BBC staff could really excel at: while creating an alien planet required crafting sets, props and costumes on a minimal budget, creating the Middle Ages often allowed designers and prop builders to source ready-made sets, costumes and props from existing assets. Generally speaking, the historicals looked much better on screen. Certainly, what we can see of "Marco Polo" - the seven-part serial that begins here - suggests a particularly good-looking and well-designed production. We can't see any of "Marco Polo" properly: the BBC erased the original tapes in the 1970s, and no film prints struck for international distribution were ever returned. We can hold out hope - if "The Enemy of the World" and "The Web of Fear" can be returned, why not "Marco Polo"? - but for now to experience these episodes we must make do with audio recordings.

From the soundtrack, "The Roof of the World" is a great episode. It's great because it introduces some well-written guest characters, and because despite being a children's program all of the characters talk like intelligent, three-dimensional adults. Marco Polo, played by Mark Eden, is a great character: charismatic, laconic, but also calculating and deceitful. He appears to genuinely like the Doctor and his companions, but at the same time he recognises that the TARDIS - described to his as 'a flying caravan' - could easily buy him out of Kublai Khan's service and allow him to return home to Venice. This sets up the serial's plot: the Doctor has lost access to his own TARDIS, and must travel from Tibet to Peking with Polo in the hopes of somehow getting it back.

Accompanying Marco's caravan is the Mongol warlord Tegana (Derren Nesbitt), who has been sent to sue for peace with the Khan but is instead plotting his downfall. He forms the villain of the serial, although quite how he isn't suspected as a villain from the first moment he shows up is a bit of a mystery. Zienia Morton plays Ping Cho, a sixteen year-old Chinese aristocrat on her way to Peking to be married. This episode sets up an immediate friendship between her and Susan, which helps Susan immensely - she's been too easily sidelined in the first 13 episodes, and with someone her own age with which to share scenes she actually gets stuff to do.

Of course one major problem hanging over "The Roof of the World" - and subsequent episodes - is the issue of race. It is a serial set in China, however none of the guest cast are ethnically Chinese. Zienia Morton is half-Burmese, which suffices to an extent, but it is difficult to fully accept this story while Derren Nesbitt struts around in Asian make-up and many of the bit players put on appalling affected Chinese accents. Does it derail the episode? No, but it does serve as a sharp reminder that social attitudes have changed over the last 50 years, and what was seen as widely acceptable them comes across as remarkably racist now.

That aside, this episode shines. John Lucarotti's script is the best the series has enjoyed so far, and it sets the Doctor and his companions off on a completely new kind of adventure. They only stayed on prehistoric Earth for a day, and on Skaro for maybe three. They're trapped in medieval China for weeks, lending "Marco Polo" a wonderful sense of the epic and giving Doctor Who's first series 11 good episodes out of 14 and a quality ratio of 79%.
Posted by Grant at 6:02 PM