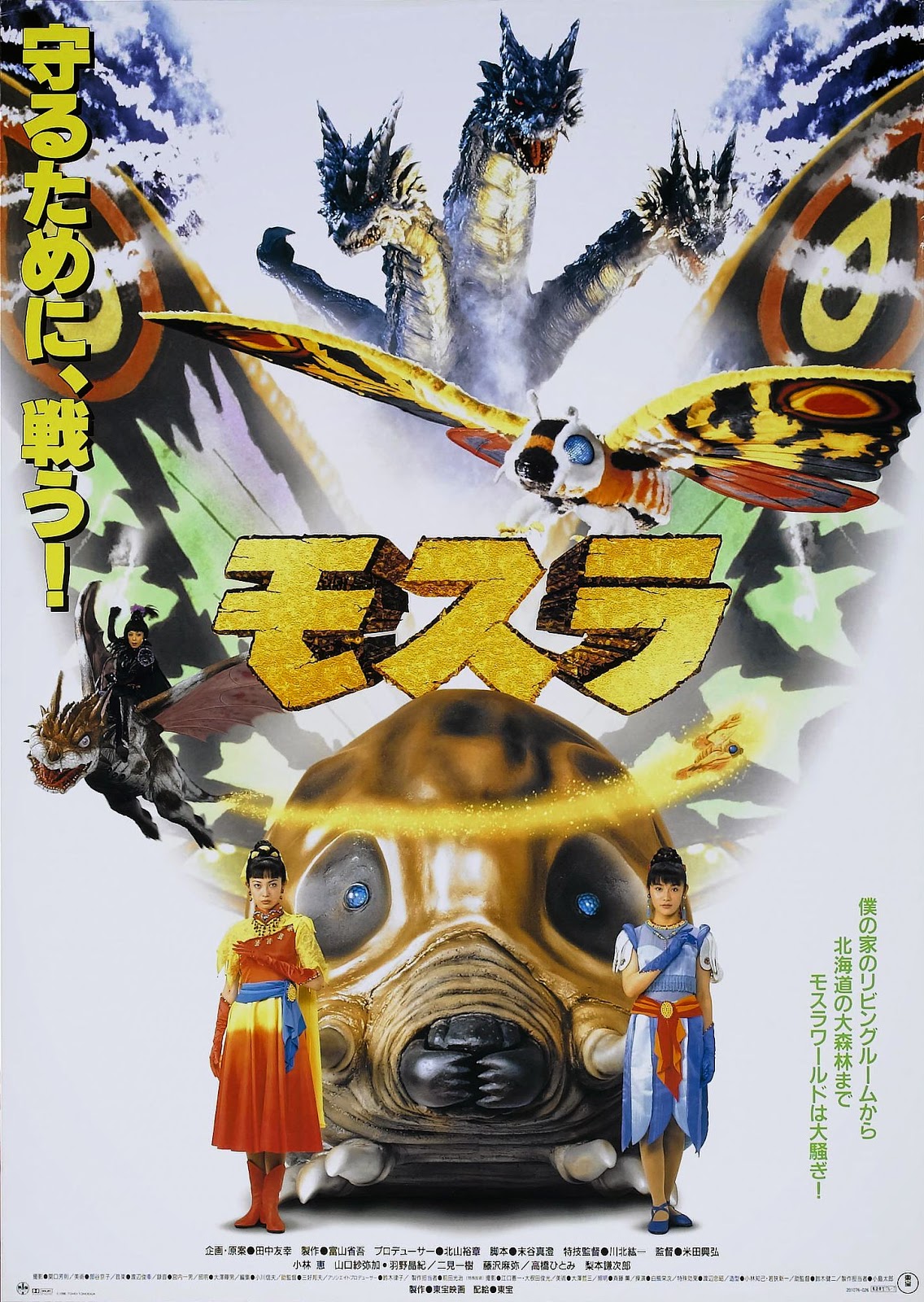 I do wonder what the producers at Legendary Pictures and Warner Bros must be making of Mothra. It was announced some time ago that their upcoming Godzilla sequel would likely feature the famous giant moth as a co-star, which does make me wonder somewhat if those producers have seen a Mothra movie in their lives. In the hands of director Gareth Edwards Godzilla was a deadly serious, some would say somewhat tedious, epic, with every effort made to make the inherent absurdity of a giant radioactive lizard believable and rational. Mothra doesn't fit any of those things.

Mothra, for those who aren't familiar with her, is a giant rainbow coloured moth. She's from another planet, but arrived on Earth in our prehistory. She lives in an island in the Pacific Ocean, where the local indigenous tribes worship her as a god. She is assisted by the Cosmos, two small alien fairies that sing to her when they require her assistance. She shoots laser beams from her antennae.

What I'm basically getting at is that Mothra is pretty much as knowingly and wilfully absurd as Japan's kaiju (giant monsters) get, and thus the worst possible fit for gravitas-addicted Hollywood blockbusters. Back home in Japan, however? She fits like a glove, as is evident in her 1996 reboot Rebirth of Mothra (just titled Mothra in Japan).

A logging operation in the northern Japanese island of Hokkaido accidentally unseals a long-dormant giant monster - a three-headed fire-breathing dragon named Desighidorah - who has been imprisoned beneath the Earth for millions of years. With the help of two young children, the space fairies Moll and Lora must awake the mighty Mothra from her slumber to save the planet.

The mid-1990s saw a kind of renaissance for kaiju movies. The Godzilla films were reaching the peak of their Heisei period, Shusuke Kaneko's Gamera trilogy pretty much set the high water mark for the genre, and Columbia Pictures released their high profile (although widely derided) American Godzilla remake. In the middle of all of these other films Toho took the opportunity to relaunch Mothra in her own trilogy of films. They're quite cleverly demarcated from their competitors: they take an environmental theme, with Mothra acting as a sort of guardian for the natural world, and they're pitched at a much lower age bracket.

This first film, directed by Okihiro Yoneda (a former assistant director to Akira Kurosawa), is simply bizarre. It doesn't simply re-introduce the fairy twins, it gives them their own six-inch wide baby Mothra to ride. It also gives them an evil sister, Belvera, who rides a sort of little dragon-come-bat. The first major action sequence is a dogfight between them in the living room of the film's central human family. It's ridiculous, and played in the most broad and naive manner possible, and pretty much sets the tone for the entire film. It's silly, it's knowingly ridiculous, and it's aimed squarely at small children.

The film's main antagonist, Desighidorah, is a pretty impressive three-headed dragon. It's a well designed rubber suit with excellent puppet heads. Mothra is- well, Mothra is Mothra. I'm not sure there's a single iteration of the character that hasn't looked like a stuffed toy on a stick. The earnest gravitas with which the cast address this utterly ridiculous-looking puppet is part of what makes the Mothra films so charming.

Despite the child-friendly tone, the film does take an abruptly dark turn as Mothra dies from her wounds and the climax of the film is left to her son Mothra Leo - who begins the film as an egg before turning into a massive grub, helping his mother fight the dragon, retreats across the ocean to his island home, and then triumphantly returns to win the day in the climax as a fully-fledged and immensely colourful giant butterfly.

The film ends with a rainbow - that pretty much encapsulates everything you need to know about Rebirth of Mothra. It's awful, but also brilliant. Give in to the naivety of the piece and you'll have a ball.
Posted by Grant at 9:23 AM