Doctor Who: "The Singing Sands" 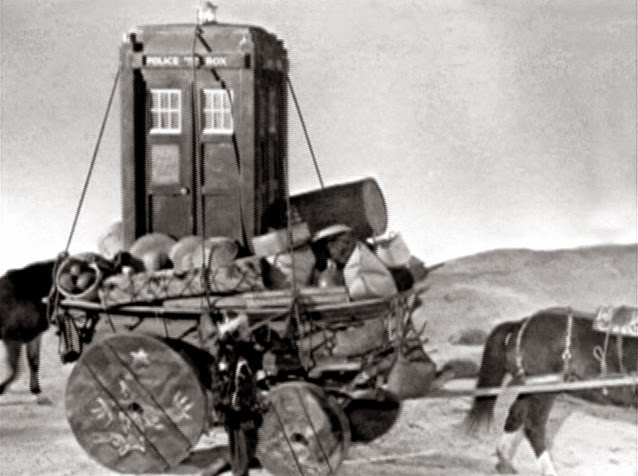 Marco Polo had confiscated the Doctor's TARDIS, forcing him and his companions to accompany him on his journey to Cathay. The first step? A potentially deadly crossing of the Gobi Desert - and there is a traitor in their midst.

As I mentioned in my previous "Marco Polo" review, all seven episodes of this serial were destroyed by the BBC in the 1970s, and no exported film prints have ever been returned. As a result we can only really appreciate these episodes by viewing a handful of screenshots made by television photographer John Cura and by listening to the audio soundtracks. Thanks to enterprising young fans in the 1960s we actually have a complete copy of Doctor Who's early years in audio form. The advantage of listening to these episodes rather than watching is that you're able to focus much more on the dialogue and, from time to time, the sound design.

"The Singing Sands" is a case in point. The episode features an enormous sandstorm that sweeps across the desert, encompassing Marco's camp and threatening the lives of Susan and Ping-Cho. Goodness knows what it looked like, but it sounds utterly outstanding. It's slightly abstracted, sounds beautiful, and is a simply gorgeous bit of audio design. It is hands-down the best element of the episode.

It's not as if the rest is too shabby. The characters shine here: not just the regulars, but the guest cast as well. Marco and Ian get to know one another better over a game of chess, and Susan and Ping-Cho develop their close friendship. It is so refreshing after 14 episodes to see Susan actually get some agency and a believable personality. Tegana is fleshed out, and makes for a reasonably convincing villain - although it is already stretching credibility that Marco doesn't wise up to his obvious treachery.

There's a wonderful epic sense about this serial so far. This episode alone takes place over a period of some days, as the caravan makes its way from Lop and across the desert. After the frantic escape from the cavemen in "An Unearthly Child" and the fairly rapid serialised adventure of "The Daleks", this is all a lovely contrast.

What's particularly odd about this episode is that the Doctor isn't in it. I mean, he is in it, but he has one line of dialogue that's easily missed. Future episodes would see individual cast members take a week off on holiday, but despite being often mistaken for that this episode simply doesn't bother to use the Doctor in his own show. It's another telling sign that, while this may be titled Doctor Who, in many ways it's still a considerable distance from the format we all know today.

Yet another good episode: this brings the season to date up to 12 good episodes out of 15, and a quality ratio of 80%.
Posted by Grant at 7:37 AM