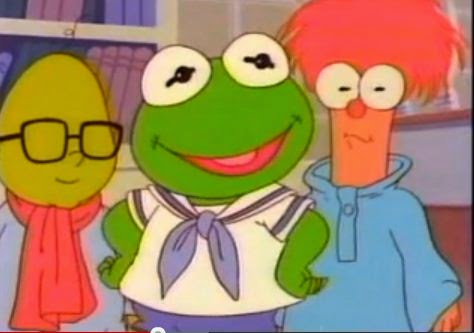 Back in 1984, when Frank Oz directed the third Muppet movie The Muppets Take Manhattan, it was immediately clear which part of the film audiences were going to like the most. A dream sequence saw Miss Piggy imagining growing up as a toddler with Kermit the Frog and all of the other major Muppet characters. It was just a whimsical musical number in the middle of the film, but everyone who worked on the sequence recognised its appeal - including Muppet creator and producer Jim Henson.

At the time Henson had already been bombarded with offers by American TV studios to produce an animated series based on his Muppet characters. He had always resisted, being fairly wary of the quality of such Saturday morning cartoons. With the Muppet Babies, however, he had an idea that intrigued him, and so he put together a deal with Marvel Productions and Japanese animation studio Toei to put together a series.

The resulting cartoon, Jim Henson's Muppet Babies, was an enormous success. It ran for 107 episodes broadcast between 1984 and 1991, and between 1985 and 1988 was award four consecutive Emmy Awards. When it finally wrapped up in 1991, it's innovative formula of toddlers indulging in pop culture-infused flights of fancy was lifted wholesale by Nickelodeon for their equally successful animated series Rugrats. The pop culture references date the series terribly, of course, but they also did and do provide additional entertainment value for adults watching the show.

The extraordinary amount of licensed film footage used during the fantasy sequences, including scenes from Star Wars, Raiders of the Lost Ark and E.T. the Extraterrestrial, have rendered Muppet Babies pretty much incapable of being re-released on home video. It now exists as Youtube clips, bootlegs and the very occasional soft toy tie-in.

Jim Henson did attempt another animated series with a cartoon Fraggle Rock, but that second attempt lasted only 13 episodes before it was cancelled.

So for nostalgic thirtysomethings, and Henson obsessives, it's anniversary time for the unreleasable, half-forgotten spin-off of the 1980s. Happy birthday, Muppet Babies. Rest in peace.
Posted by Grant at 10:29 PM