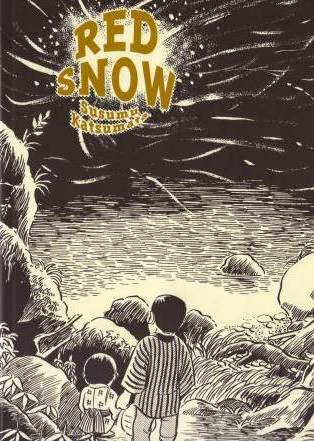 The tone flows from sweet to mournful and back again in Red Snow, a beautifully packaged collection of manga short stories by writer/artist Susumu Katsumata. I borrowed this book from a library on a whim, having no prior knowledge of Katsumata's work, and was pleasantly surprised.

The stories follow a genre known as 'gekiga', of which I was not previously aware. Its name literally translates as 'dramatic pictures', and was an artistic movement founded in the 1950s to distinguish its works from the more all-ages, child-friendly manga being created by Osamu Tezuka and the like. While the artwork is simple, the stories are complex and mature. It presents characters full of sadness or regret, with more realistic or adult problems. In the case of Red Snow there's a share of sexual themes as well - I have no idea if this is a common component of gekiga.

The stories are united in their pre-industrial rural setting. It eschews typical Japanese period drama by ignoring samurai and higher classes, focusing instead on the lives of countryside farmers and dirt-poor townspeople. The book's use of folklore and fantasy is extensive, although by no means overwhelming; it's almost as if the supernatural is simply as much a part of the natural world as everyday life.

Katsumata's art style is highly stylised and stripped back, using only the barest amount of detail necessary to tell the story. There's a visual simplicity to it that really brings the stories and the characters to the fore. As a writer he makes extensive use of ellipsis, giving the reader just enough detail to express the story without actually showing the conclusions in full. It's a very Japanese thing to do: I've been watching a lot of Japanese cinema this year and the same narrative technique is regularly applied there.

It is all beautifully packaged by Drawn and Quarterly in a hardcover collection. D&Q are one of the world's best boutique publishers of comic books and graphic novels, and they demonstrate a typical reverence to Katsumata's work. It's very easy to glance at the shelves of popular bookstores and see nothing but children's manga like One Piece and Dragonball. While they have their place and their fans, there's so much more to be found within the manga medium. Red Snow is just a beautifully work, and deserves a lot more international exposure that it seems to have received.
Posted by Grant at 8:25 PM