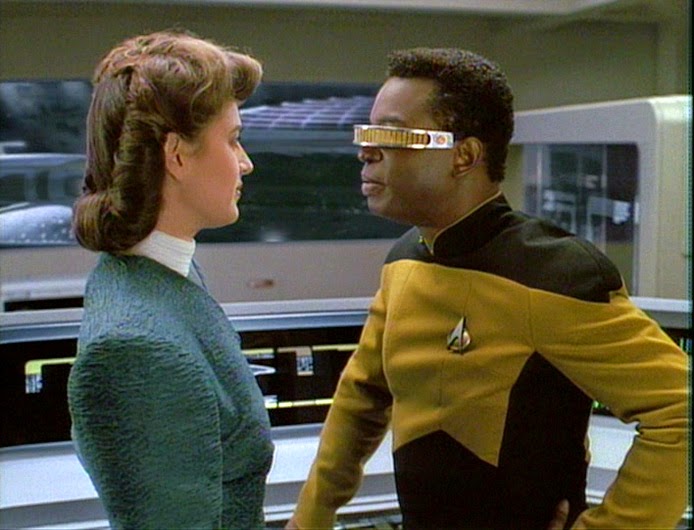 While investigating a derelict alien spacecraft in the middle of an asteroid field, the USS Enterprise is caught by an ancient booby trap. With hours before the Enterprise's destruction, Lieutenant La Forge (LeVar Burton) utilises a holographic simulation of one of the Enterprise's original designers to find a way to escape.

Alternatively, "Booby Trap" is about how Geordi La Forge doesn't know how to talk to girls, so in the middle of a ship-wide crisis he manufactures one on the holodeck.

I found this episode deeply uncomfortable to watch. I've never been an enormous fan of La Forge's character, but he always seemed a stand-up and likeable guy. Here we see him go on a disastrous date in the episode's teaser, fumble his way through a conversation with Guinan (Whoopi Goldberg) about how he doesn't know how to chat up women, and then create a holodeck simulation of noted physicist and engineer Dr Leah Brahms as some kind of weird half-romantic, half-sexual fantasy love interest. It's a profoundly misguided act of character sabotage, since it takes a character who was previously fairly noble and turns him into a creepy kind of stalker.

I am aware that a subsequent episode, "Galaxy's Child", forces Geordi to face the reality of what he's done here. I'm also aware that that episode is a full season away. There's nothing in this specific episode right now that suggests what Geordi has done is in any way inappropriate. If anything it actively sides with him, as if he's experienced some kind of sweet romantic experience by episode's end. Even knowing that my issues with this episode get addressed down the line, I still have a massive problem with how this storyline is expressed. It really does feel quite disgusting: Brahms is a real person, and La Forge has simulated her and then shared a romance with her. It's a horrifying violation, and immediately makes me wonder how dreadfully a holodeck would be abused by its users in this fashion were it a real technology. The celebrities of the 21st century have enough problems with hacked nude photographs distributed illegally on the Internet: imagine what those hackers could do in the 24th century.

Elsewhere the episode is actually rather decent. Captain Picard gets some great scenes exploring the ancient spacecraft, and his pleased return to the Enterprise allows for some great light comedy from Riker and Troi. The basic gist of the episode is reasonably good as well. It's just all flushed down the toilet by its primary plot.

Until now Season 3 has been remarkably enjoyable. This episode is a profoundly wrong-headed misstep. It drops the season's quality ratio down to 67%: four good episodes, two bad ones.

Random trivia time: Susan Gibney, who plays the holographic Dr Brahms, was short-listed to play Captain Janeway in Star Trek: Voyager. She lost to Genevieve Bujold because it was felt she was too young for the part.
Posted by Grant at 4:50 PM