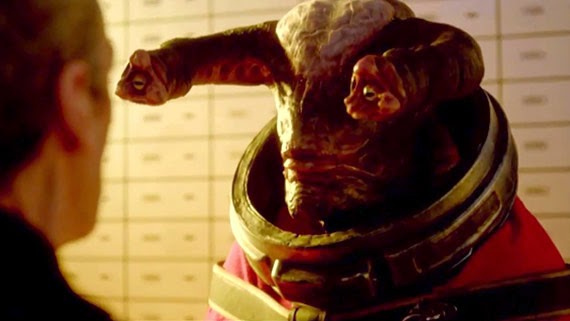 Isn't it always the way? You're all set to go on a second date with your new boy and suddenly you're on the other side of the galaxy with your memory wiped, alongside the Doctor, a cybernetically augmented hacker and a shape-shifting mutant, and given a mission to break into the most secure bank vault in the universe.

As I have said on numerous occasions, Doctor Who must excels when it's performing a pastiche of something else. The series itself pretty much exists as a framework for telling stories rather than a prescriptive limitation on them. As a result you can quite happily make The Time Traveller's Wife with the series, or cross The Phantom of the Opera with Jack the Ripper, or tell an Agatha Christie mystery that co-stars Agatha Christie. In a similar vein, "Time Heist" sees Doctor Who undertake the heist genre, and the episode is correspondingly filled with slow-motion hero shots, unexpected twists and turns, revelations of secret identities and a group of unlikely companions - each of whom has his or her own specific skill with which the complete the perfect crime. It's basically Who's 11.

As a sci-fi pastiche it works fairly well, and barrels along at a pretty neat pace. It perhaps moves along a little too fast: like much of modern Doctor Who it's all a little too breathless and rushed to have the best possible impact. The guest cast are all fairly appealing, and the plot generally makes sense with a minimum of silly hand-waving.

The Teller, a monstrous psychic creature with goat-like eyes on prehensile stalks, makes for a great new alien, although given the plotline it seems unlikely we'll see it again. Its extraordinary power - to use psychic energy to liquify a person's brain inside their head - is realised with a shocking frankness. I'm a sucker for a good rubber-suit monster, so the Teller was pretty much my favourite part.

Other elements were slightly less successful, notably co-writer Steven Moffat's apparent inability to actual kill off a character. All the way back in "The Empty Child" and "The Doctor Dances" it seemed like a remarkable denial of Who's status quo. These days it feels like business as usual: Moffat will give us the momentary emotion of seeing a liked character die, but then safely return them to life by episode's end. It's getting to the point where I'm desperately craving some more death in my favourite television programme. That doesn't seem healthy.

After about 30 minutes of running around indulging in the sorts of things heists indulge in, the episode reaches a rather clever and twisted climax, which again is the sort of thing you want from a heist story. The conclusion leaves a lot of unanswered questions, but frankly none of them are questions you feel need answering in the heat of the moment. The fact that it all gets a bit shaky in retrospect is almost by-the-by.

I was a little concerned about the episode's final scene, which seemed to herald a return to the Doctor treating Clara like some kind of girlfriend again. The short teaser for next week's episode only made me more suspicious.

The bottom line is that this is the sort of episode that should be an average episode of Doctor Who, and I worry that this year it's feeling a bit like one of the good ones instead. There are still another seven episodes to go, and following on from last week's excellent "Listen" I'm hoping we might just get better and better going on.