Doctor Who: "Rider from Shang-Tu" 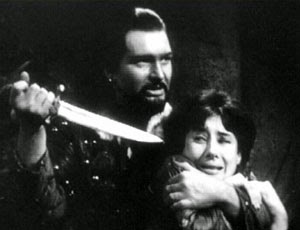 It's 21 Match 1964, and the Doctor, Ian, Barbara and Susan remain trapped at the hands of Venetian explorer Marco Polo. While the Doctor has repaired the TARDIS, Marco has both keys - and he refuses to give them back. When a rider arrives from Shang-Tu, Marco learns that Kublai Khan demands his presence at the summer palace in Cheng-Ting. While the caravan members move on by horseback, the TARDIS remains behind with the other cargo - unless Tegana's latest plan succeeds.

We're now five episodes into this serial, and for the first time it's beginning to drag. This episode is, in broad strokes, a replica of the one before it: the Doctor and his companions are Marco's prisoners, Tegana has another plan up his sleeve, and Marco refuses to listen to reason over whether or not his Mongol warrior companion is a traitor. At the episode's climax they're all set to finally escape, but something gets in their way. Lather, rinse, repeat.

It's a shame, because until now the serial has been damn-near faultless - yellowface casting not included. It's possible of course, as the caravan has moved from mountain to desert to forest, that the visuals would have made this episode a bit more distinctive. With the video missing, we'll probably never know.

Oh Tegana. He started the serial as quite a threatening presence, but as each episode has passed he has become more and more like a Scooby Doo villain. His plans seem poorly thought-out, and for some weird reason he always has another ready to go in the next town. He's like Wile E. Coyote, grabbing his next elaborate trap, setting it up, having it fail, and then immediately leaping up to try out the next one. At least this time his plan is focused on stealing the TARDIS rather than on killing everyone, but unfortunately the script doesn't really make it clear why his plans have changed. Does he simply want to embarrass or inconvenience Marco, who wants to give the TARDIS to the Khan? It's a little difficult to work out.

John Lucarotti's dialogue is still strong, and the performances are - from the dialogue - very good. It's just a shame that it feels like we're treading so much water, as if Lucarotti had a plot for six episodes but was told to stretch it to seven. It doesn't quite seem strong enough to justify giving it the thumbs-up, and that leaves Series 1 with 14 good episodes out of 18. That's a quality ratio of 78%.

One final note on the missing episodes. "Marco Polo" is one of only three Doctor Who stories for which no visual footage remains (the others are "Mission to the Unknown" and "The Massacre of St Bartholemew's Eve"). This is despite it being sold by the BBC to nineteen different countries, more than any other serial of Doctor Who's first six seasons. That the entire serial has vanished off the face of the Earth is not only a tragedy, it's also weirdly unlikely. Rumours persist that the BBC might have found a copy among the many British TV prints recovered from Africa - the same haul that returned "The Web of Fear" and "The Enemy of the World". There are many reasons why this might be true, and there are many reasons why it might not be true at all. What is true is that at one point in the past there were more copies of this story travelling the world than any other, and that gives me hope that one day we might be able to see this serial after all.
Posted by Grant at 10:53 AM