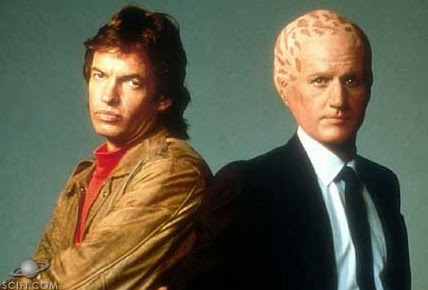 When Alien Nation was released in cinemas in 1988, it was a fairly ordinary near future sci-fi thriller with decent performances by James Caan and Mandy Patinkin but saddled with a by-the-numbers script and a lot of police action movie cliches. It sort of came and went: people watched it, some enjoyed it, nobody really cared.

For some reason 20th Century Fox did, because the following year they launched Alien Nation as a weekly TV drama. The cast changed, replacing Caan with Gary Graham and Patinkin with Eric Pierpoint, but the basic premise remained the same: an massive alien spacecraft crashed into California's Mojave Desert and it's population, spotty-headed extraterrestrials who were being transported as slaves, go on to become a large refugee population in the Los Angeles area. The series is set some years into a long process of integration, and follows two police detectives - one human, one alien - as they investigate crimes in a racially charged urban environment.

Thanks to writer/producer Kenneth Johnson, who re-developed the movie concept for television, Alien Nation remains one of the best US science fiction TV dramas of all time. The day-to-day plots might have been a bit hackneyed and stereotyped, but no one before or since has developed an alien race and culture in such an interesting fashion.

They're referred to as Newcomers, but Johnson gave them an actual name: the Tenctonese. They had their own language, which was spoken periodically through the show. They demonstrated their own customs, religions and cultural traditions. The series explored their sex lives and biology. In one key story arc, newcomer George Fransisco (Pierpoint) and his wife Susan (Michele Scaribelli) decide to have a third child. It turns out it needs three sexes to procreate - one female, and two kinds of male - and halfway through pregnancy the foetus is transferred from the mother to the father. It all culminated in a fantastic episode, "Real Men", in which Sykes (Graham) has to coach George through childbirth.

Like all of the best SF television, the series used silly-looking aliens to talk about real-world issues. By all means it wasn't necessary to insert the Tenctonese into Los Angeles to tell stories about how that city has major issues with racism and cultural intolerance, but it certainly made it easier for a mass audience to digest.

Alien Nation was a pretty big hit for Fox, however lower-than-expected advertising revenue caused a jittery set of executives to cancel their entire 1989 fall line-up and start over in 1990. Alien Nation finished its sole season with an earth-shattering cliffhanger that wasn't resolved into a subsequent administration signed off on a set of TV movies four years later. Firefly fans can get in line: Alien Nation fans are still smarting at the 1990 cancellation.

I'm surprised this series has never been revisited or remade since the last TV movie in 1997. Johnson developed a brilliant setting ripe with story possibilities, and it's all just sitting there wait for someone at Fox to realise its value and give it a second shot. It sure as hell deserves it.
Posted by Grant at 9:39 PM