Doctor Who: "Robot of Sherwood" 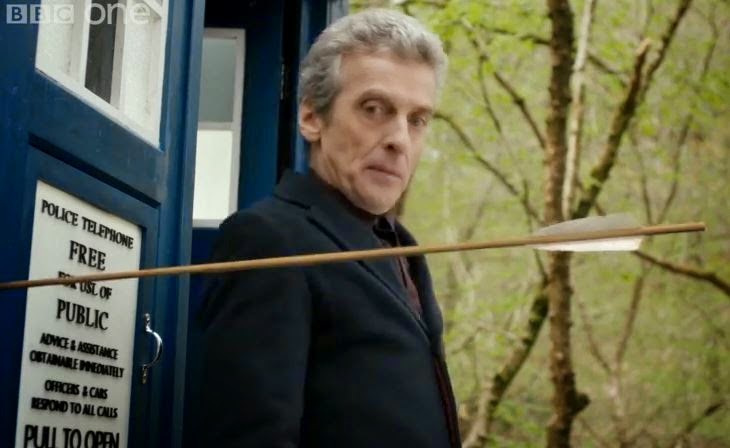 Clara wants to meet Robin Hood, but there's only one problem: there's no such thing as a real Robin Hood. To prove it the Doctor takes her to England in AD 1190, where they immediately discover killer robots disguised as knights, an evil Sheriff of Nottingham... and Robin Hood.

"Robot of Sherwood" is a remarkable achievement. Doctor Who has been running for more than 33 seasons over 51 years. The BBC has broadcast 243 of the Doctor's adventures, so for an episode like "Robot of Sherwood" to be so egregiously awful as to raise the question of it being the worst episode of all time it has to be some impressively terrible television. This is an episode that wallows at the bottom of the league tables, jostling for position with the likes of "The Doctor's Daughter" and "Timelash".

There was a mild controversy this week when the BBC confirmed it had cut about a minute from the episode over concerns the action (a beheading) would be insensitive in light of the murder of journalists in Iraq. I actually didn't have a problem with the BBC making the edit. In retrospect I just wish they'd edited out the remaining 44 minutes.

It's important to note that none of this appears to be the fault of the actors. Capaldi plays what the Doctor is given with enthusiasm; it's simply a shame that what he's given is childish competitiveness and bouts of shouting. Jenna Coleman actually does a great job, as does Ben Miller - who is absolutely wasted as the Sheriff of Nottingham. Coleman and Miller share the episode's one decent scene as Clara surreptitiously interrogates the Sheriff on how he came to be in command of an army of killer robots from the future. Tom Riley plays Robin Hood with a lot of energy, but the Robin Hood he's playing is deliberately the most stereotypical I've seen on screen in years.

Beyond that, the episode is a wall-to-wall mess of weak jokes, slapstick comedy and ill-advised creative choices. Mark Gatiss has never been the strongest writer of modern Doctor Who, but this is astonishingly weak even for him. It's actually quite embarrassing to watch. I was mildly concerned at the level of slapstick and comedy sound effects in "Deep Breath". The fact that they've returned only two weeks later fills me with dread. Is this really the Doctor Who that the BBC wants to be making? Is this really the best they can produce?

I honestly can't work Gatiss out. Last year he wrote an outstanding docudrama, An Adventure in Space and Time, and some years before that he co-wrote the stunning comedy series The League of Gentlemen. Put him behind the keyboard for Doctor Who, however, and you get total rubbish. "The Unquiet Dead" was one of the weaker episodes of Season 1, and "The Idiot's Lantern" one of the weaker of Season 2. I don't think there's a single episode of Doctor Who he's written that I have actually liked, and the weirdest part is that I swear his writing is getting worse. Since he is the co-creator of Sherlock, Gatiss is regularly mentioned as a potential successor to Steven Moffat as showrunner of Doctor Who. God help the show if that's true.

Perhaps the kiss of death for "Robots of Sherwood" is that what it does most successfully is remind long-term viewers of better stories. Aliens from the future exploiting medieval despots to repair their spacecraft is also the storyline of "The Time Warrior", and that's a minor classic. The Doctor name-checks "Carnival of Monsters". Clara's solving the plot while the Doctor larks about in comedy routines is right out of Season 17. Richard the Lionheart is mentioned, and of course the Doctor has met Richard I. He did it all the way back in March 1965 in "The Crusade". Let's dwell on this for a moment: in 1965, on a minimal budget, Verity Lambert and David Whitaker crafted an adventure for the Doctor set in AD 1190 that was intelligent, thrilling, literate and captivating. With the benefit of 49 years of television development, more sophisticated audiences and a comparatively massive production budget, Steven Moffat and Mark Gatiss have given us Peter Capaldi sulking at Tom Riley in an unconvincing dungeon.

The thing is, I'm a big fan of Moffat's Doctor Who. While his vision of the series is not to everyone's taste, I've found it's had enormous amounts to recommend. Episodes like this severely shake my confidence. Is it the worst episode ever made? Probably not, but it's most likely the third-worst. To Messrs Gatiss and Moffat: are you happy with third-worst? Three episodes in, and despite Capaldi's sterling portrayal of the Doctor, Season 8's quality ratio languishes at 33%.
Posted by Grant at 9:24 AM