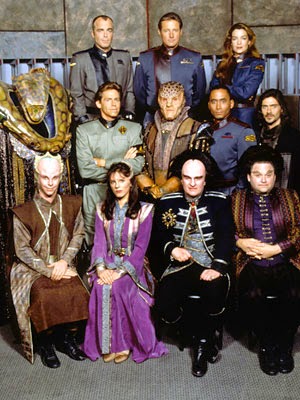 I remember, back when Babylon 5 was originally broadcast, that it was Season 3 that I enjoyed the most. Season 1 had been shaky as all hell, but I was at an age where if a TV series had a spaceship in it I'd doggedly watch it anyway. Season 2 was a sudden and marked improvement that actually got me hooked into the series. Season 3 struck me as genuinely great television, and I finished the season finale on the edge of my seat, desperate to see what happened next.

It's been 18 years since that first viewing, and to older eyes the season is perhaps less impressive in some aspects and more impressive in others. The overall arc is remarkably well told, and the Shadow War is introduced incrementally. It's quite a shock, after watching "Z'ha'dum", to jump back to "Matters of Honor" and see how far the story has moved in just 22 episodes. The war is fully in motion now. New characters have been introduced, others have died. Enemies like Bester have become allies, and allies like Kosh have been swapped with distanced, threatening replacements.

The series introduced one new lead character this season, the dashing ranger Marcus Cole (Jason Carter). It's kind of weird that Warner Bros demanding J. Michael Straczynski introduce a young action-oriented co-star in Season 2, which he did resentfully and with the minimum amount of screentime or characterisation possible, only to throw the character off the bus at the end of the season. A year later and he's introducing a young action-oriented co-star of his own. Marcus is more lively than Keffer was, and certainly more engaging, but I strongly suspect that's due to effort in the writing than any core differences between them. They're both pretty clichéd characters, it's just that Marcus is a slightly more fitting cliché for the story that's being told.

The season has also pushed a large divide between Sheridan and the rest of the cast. Most of the characters in Babylon 5 are deliberately flawed, and this gives them very strong developmental arcs. Londo, G'Kar, Franklin, Gardibaldi - they can all make mistakes, or commit lapses of judgement, or do awful things that must then be atoned for or learned from. Sheridan stands apart from that: he's engaged in a very old-fashioned hero's journey. He is the star of the series, but it's become increasingly apparent over the course of the season that he doesn't necessarily fit there. Even episodes where he does make awful choices for the greater good (such as "Passing Through Gethsemane", when he engages in torture) are framed by Straczynski in such a way as to preserve his character's heroic nature.

Of course, some episodes were better than others. The five best this season (in broadcast order) were probably:

I'm taking a break from Babylon 5 for now, not because I'm tired of it but because I don't actually have a copy of Season 4 to hand at the moment. The first three I managed to source via op shops and second-hand stores, and I haven't been so lucky with the next one.
Posted by Grant at 9:11 AM