Star Trek: The Next Generation: "The Ensigns of Command" 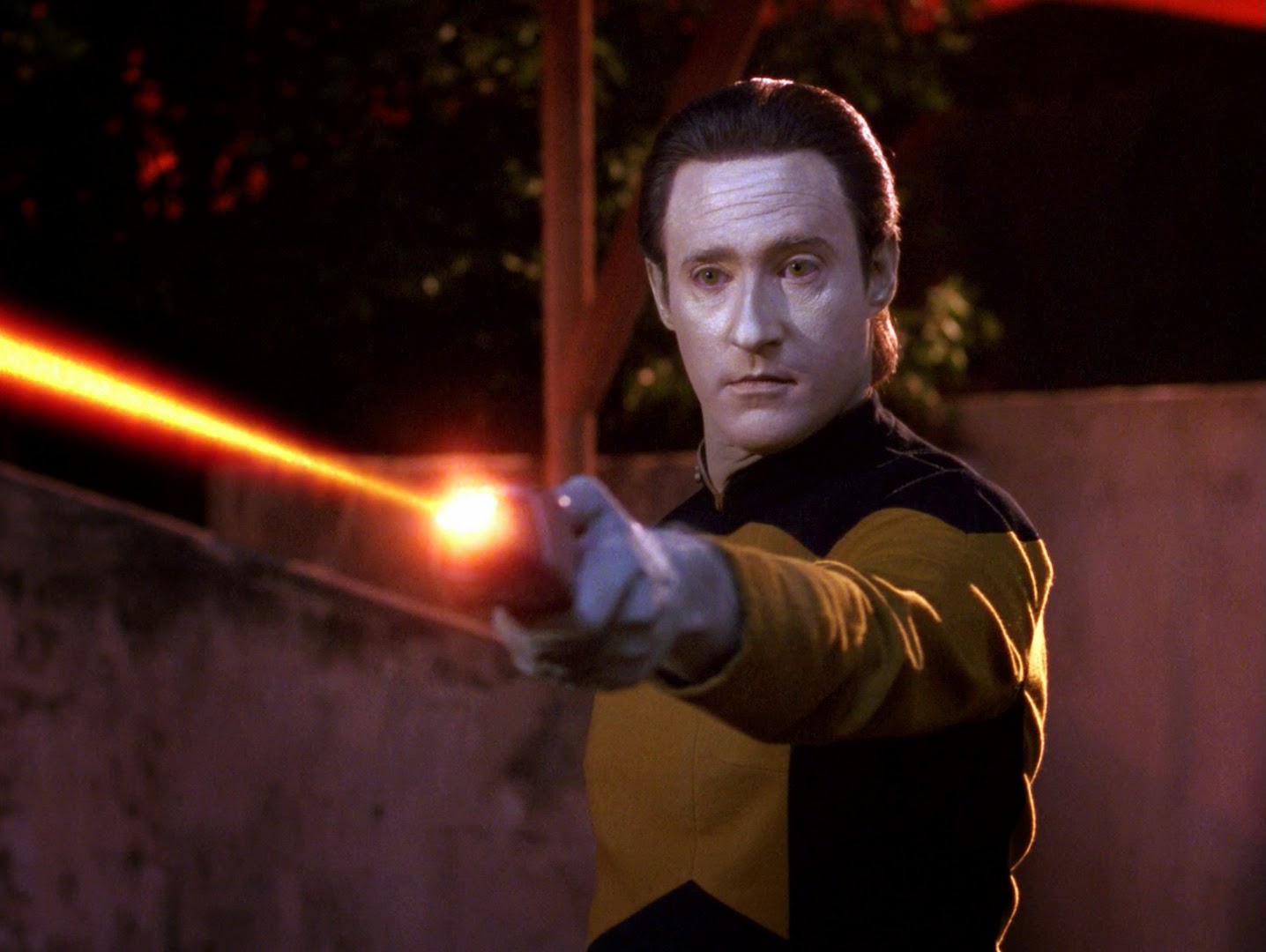 The Enterprise receives an unexpected message from the reclusive Sheliak Corporate, a dangerous and territorial civilization with whom the Federation has a tenuous peace treaty. Humans has been detected on a planet in Sheliak territory. The Enterprise is given a narrow deadline by which they must evacuate all colonists before the Sheliak move in and murder them all. While Picard debates treaty law with the Sheliak to buy time, Commander Data travels down to the planet to rescue the isolated humans - only to discover an entire colony that's been there for 90 years.

While "Evolution" was shaky but promising, "The Ensigns of Command" is flat-out great. It's so great, in fact, that part of the production team stole the idea a few years later to make the Deep Space Nine episode "Progress". Due to radiation in the planet's atmosphere, Data is the only member of the Enterprise crew able to travel to the surface of negotiate with the colonists. They want to stay and fight the Sheliak. Data assures them that the Sheliak will easily kill them all. They don't believe him, or want to take the chance to save their homes. When all Data is capable of is logical argument, and the logical argument has failed, how does he convince the colonists to leave and save their lives?

The episode is a great excuse for Brent Spiner to deliver a knockout performance. He plays Data's confusion very well, particularly his lack of confidence when it comes to emotive arguments. He doesn't believe himself capable of convincing the colonists to move on, and yet with a three-day deadline he is the only chance they've got. There are some great scenes of Data communicating back up to the Enterprise to report his failure, and Riker telling him to just shut up and get the job done. It's a high pressure situation, and Spiner expresses Data's frustration very well.

The guest cast are not quite so accomplished. Eileen Seeley is appealing as Ardrian, a local with a crush on Data. Grainger Hines is terrible as Goshaven, but some quick research provides a few explanations as to why. For one thing he's dubbed, Hines claiming his own performance was so poor that someone else needed to re-record the dialogue. He also seems too young for the sort of elder statesman role the script called for, so I suspect the larger problem is that he was simply miscast. The dubbing makes the character come across as particularly unconvincing, and for whatever reason Hines isn't even credited on-screen for his performance.

Back up on the Enterprise, Picard (Patrick Stewart) undertakes the near-impossible task of looking for a loophole in the legal language of a 500,000 word document. Stewart plays Picard's frustration extremely well, and the bridge scenes offer an unexpected amount of humour and warmth. 'You enjoyed that,' says Riker, as Picard cuts the Sheliak communication off in mid-sentence. 'You're damn right,' is Picard's uncharacteristically blunt reply.

Both Data and Picard's solutions are inventive, and dramatically well-earned. Together they make "The Ensigns of Command" one of the best episodes of The Next Generation since "The Measure of a Man" - which happened to share the same writer, Melinda M. Snodgrass. Funny that.

We're two episodes into Season 3, and both have been good. I'm feeling very optimistic for an enjoyable run of episodes. This one does have a silly title, though. It may be from a poem by John Quincy Adams, but you say 'ensigns' on Star Trek and it means a very specific thing. The title just makes it seem confusing.
Posted by Grant at 8:55 AM