Doctor Who: "The Brink of Disaster" 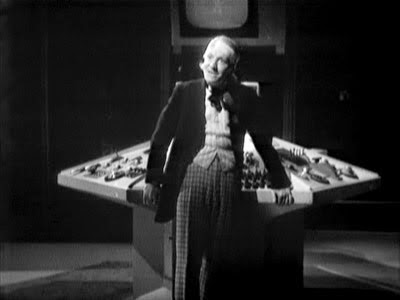 It's Saturday teatime on 15 February 1964, and time for more Doctor Who. As the TARDIS continues to malfunction, the Doctor grows to realise that his companions have not sabotaged the ship, but rather something much more sinister has taken place. With only 10 minutes before the TARDIS is completely destroyed, can he find a means of averting disaster?

A few things about this episode immediately come to mind about "The Brink of Disaster". Firstly almost the entire episode comprises one 19 minute scene, as the TARDIS crew desperately attempt to work out what is going wrong. Early 1960s television always felt a bit like watching live theatre, but this episode really feels like it. Such a long take makes a few problems for William Hartnell, who stumbles his way through more than one of his lines - it's good that William Russell is standing next to him to jump in and keep the scene moving.

The second thing is the episode's big twist, that actually feels half-strangled by the time it comes out: the TARDIS has a sentient intelligence. For 21st century Doctor Who viewers this is taken as a standard part of the series mythology, but here even the Doctor seems surprised that the TARDIS is trying to tell its passengers something is amiss.

How the TARDIS tells them, however, is utterly bizarre. It lights up all the bulbs on the ship's fault locators. It melts a clock. It electrocutes its passengers. It shows them images of other planets on the scanner screen. Quite how they were supposed to guess from all of those clues that the fast return switch is jammed, or how Barbara manages to work it out, or quite how one jammed switch can destroy the entire ship without any fail-safes in the way, goes unexplained.

Ultimately this episode doesn't really work, and two of the main reasons are that it fails to explain quite why the TARDIS crew became so deliriously paranoid last week, and that all of the other possibilities floated last week - the TARDIS has been invaded, one of the companions has been possessed - are more interesting than the actual culprit: a broken switch.

With the day saved, Ian and Susan are relieved, while Barbara leaves the room in a silent rage. This allows for a genuinely brilliant epilogue, as Barbara and the Doctor mend their differences for the first time in the series, and head out to explore their new destination hand-in-hand. This is the ultimate achievement of this two-parter: it gives the characters pause after their first two serials and allows them to actually bond as a group of travelling companions.

So to sum up, there are some great elements in this episode, but it's ultimately not a particularly good half hour of television. That leaves Doctor Who Series 1 with 10 good episodes out of 13, or a quality ratio of 77%.
Posted by Grant at 5:02 PM