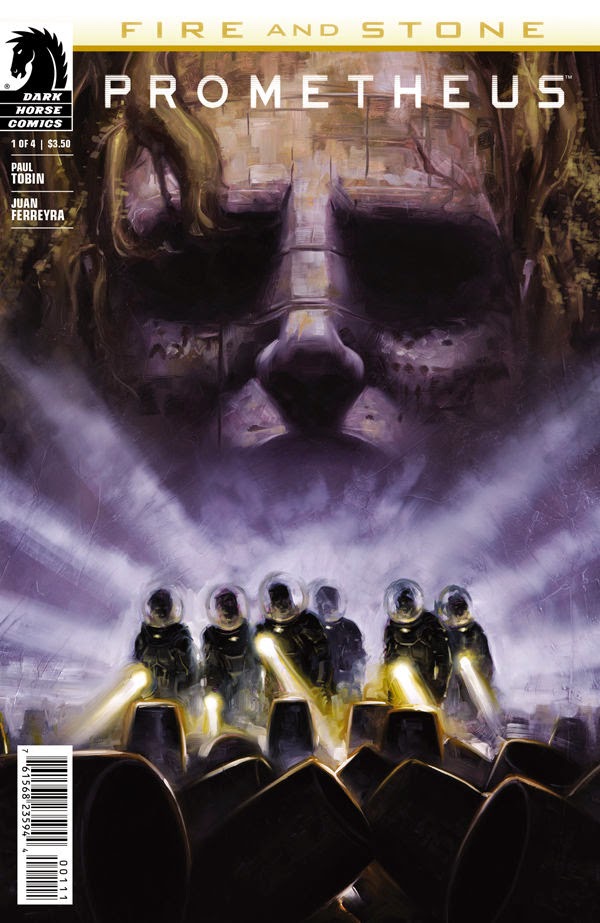 Before Dark Horse pinned half of their monthly sales of Star Wars, they pinned them on Alien and Predator. It was their faithful, clever exploitation of those 20th Century Fox licenses that enabled them to score the Star Wars rights in the first place. Now that Disney has shifted publication of Star Wars over to Marvel, what better properties for Dark Horse to fill that gap than Alien and Predator? And, in what is sure to be a contentious move, Prometheus.

Oh Prometheus. You could use the overwhelming and irrational hatred of hardcore Alien fans for Ridley Scott's 2012 prequel and use it to power a country for a year. While the film itself was a visually attractive and nicely paced sci-fi thriller with a tremendously awful screenplay, if you listened to some fans you'd assume Scott and writers John Spaights and Damon Linendorf had committed some weird form of war crime. I'm really interested to see if comic book readers accept a Prometheus comic. They should give it a chance, though, because Prometheus: Fire and Stone #1 is actually quite good.

The concept of this big Alien/Predator relaunch is a set of four four-part miniseries, each of which is self-contained but collectively form a larger narrative. We're starting off with Prometheus and in short order will be offered Aliens (note the "s"), Predator and Alien vs Predator. Based on this issue I'll probably at least sample them all.

This issue sees a salvage mission dispatched to LV-223 about two centuries after the starship Prometheus went there. The salvage team is expecting a desolate planet devoid of life. Instead they find an alien rainforest with more than one surprise. The last two pages really surprised me, and I'm now very keen to see where things are going. Paul Tobin writes the book, which features (so far) much better plotting and dialogue than Prometheus had. Juan Ferreyra provides distinctive and painterly artwork that makes for a nice contrast from the sharply inked stuff you usually see in comic books.

If you can move past your anti-Prometheus bias (assuming you have one), and are looking for another solid science fiction comic, this might just be a book for you. (3/5)

I always loved Morrison and Irving's collaborations on Batman Incorporated, and they re-teamed over at Legendary Studios to produce this new mini-series about a washed-up Hollywood screen writer and the sci-fi movie protagonist that's beginning to become an obsession. This book appears to be Grant Morrison tracking back through a lot of old tropes and storylines, so any long-term fan of his writing is going feel like he or she is on very familiar ground. Irving illustrates it beautifully - I think this is almost certainly the most attractive comic of the week. I adored it, but then I'm a very big fan of Morrison's work. If you're not, or if you've tired of seeing the same notes played again and again, you might want to give this one a miss. (4/5)

Gail Simone returns to Batgirl one more time, for this alternative future take where Barbara Gordon's life has become even more upsetting, and there's not one but three Batgirls defending Gotham. It's a very mixed bag: I adored the three new Batgirls (well, actually two old Batgirls and one new one) and would read the hell out of a regular comic with those three in it. I hated what Simone did with Barbara in this book: it didn't ring true and felt like a tragedy too far. All up, it's pretty skippable. (2/5)

I do like Nguyen and Fridolfs' artwork, and it's nice to see it back. This week sees the plot development everyone saw coming actually arrive, as Selena Kyle is revealed to be Selena Calabrese, heir to the entire Gotham underworld. Meanwhile Batman continues to fight the Architect as the streets of Gotham rumble to pieces. Hush is still here too, still stinking up the place; I hate him so much. Overall it's a pretty average issue, although a last page epilogue points to some more interesting developments on the horizon. (2/5)

Another alternative future for Batman, and like Batgirl it feels like a mixed bag. I loved Aco's artwork, but wasn't so enamoured with the storyline - Batman breaks into a Lexcorp laboratory to steal badly-needed technologies from him. It's such a minor sort of one-note storyline, and didn't really surprise or enthrall me. That's the problem with DC's annual one-shot events: they're rarely worth the time and money. There's also a decided lack of innovation in a lot of these books: it's five years later. Think outside the box, and write something mind-boggling. Too many of these books are thinking small. (2/5)

Another month, another Image science fiction comic. This one is a space western, although one with the emphasis much more firmly on 'western' than on 'space'. It follows a new sheriff in town, who is a single mum (a nice wrinkle on the standard trope), meeting the standard character you'd expect her to meet: rough locals, grumpy deputy, clearly corrupt super-villain mining boss, and so on. It's got some nice colouring work by Ron Riley that uses soft, faded colours to give the whole thing a very washed out look, like a book that's been out in the sun too long. All up it's fairly entertaining stuff, if a little stereotyped. Future issues will see if it flies or falls. (3/5)

A group of medieval soldiers are trapped inside a monastery. Outside alien forces are raising the dead into an army, and inside there's a terrible secret behind the monks' collective vow of silence. The plot develops in unexpected directions this issue, making this book even stronger as it goes on. I love Culbard's artwork, but have to admit I could do with his art being a little more compressed. There are as few as three panels on each page, and I'm not sure it couldn't be condensed to allow a little more to happen each issue. Still that's actually a minor quibble with a story this intriguing. (4/5)

Doctor Who: The Eleventh Doctor #2

I wasn't wildly enamoured with the story of this issue - the Doctor takes his new companion to an alien planet, it's been turned into a theme park where everyone is mysteriously happy - but what did impress me was the characterisation of the Doctor. Al Ewing has absolutely nailed Matt Smith's dialogue style and physical mannerisms, making this comic feel incredibly authentic. So far Titan Comics are doing a great job with the Doctor Who license, and certainly there are enough hooks in this issue to suggest a lengthy, well-planned run for the 11th Doctor. (3/5)

I was going to write something about how dropping a tie-in one-shot into the schedule just three months into a new book can do nothing but kill its momentum stone-dead, but the truth is that sales-wise Infinity Man was dead on arrival. It's a shame because it's been a relatively entertaining book, and this issue is genuinely great. It's a familiar story, starring just two of the book's five regulars, but one very well told with really appealing artwork by Philip Tan. Oh, and OMAC briefly pops up - Didio and Giffen really aren't going to let that one go any time soon, are they? (4/5)

Kamala gets a new pet, and continues her work in tracking down the elusive Inventor. I have no idea who this massive bulldog is: something to do with the Inhumans I think, but he's a part of the Marvel Universe I genuinely have no experience with. That in mind, Wilson writes this issue in an engaging and easy-to-follow manner, so it's pretty easy to work out that the Inhumans sent Kalama a giant dog for some reason, and just shrug and roll with it. Adrian Alphona's artwork continues to be breezy and likeable. It's got such a wonderfully goofy edge to it that really suits the characters. (4/5)

What's that, I hear you ask, another comic book miniseries by Abnett and Culbard? It's true - not only are they midway through Dark Ages for Dark Horse but they're already launching this rather splendid miniseries from Boom Studios. The pitch for Wild's End is pretty simple, and your reaction to that pitch will pretty much tell you whether or not the book is for you. Here goes: it's The Wind in the Willows meets The War of the Worlds. The old-fashioned English dialogue is pitch-perfect, the artwork is bright and colourful, and the characters are amusing and delightful. This is an absolutely brilliant comic. (5/5)

Winner of the Week: Wild's End, by jove.
Loser of the Week: Not a great week for Bat-books. You can take your pick. All three were mediocre in the end.
Posted by Grant at 9:14 AM