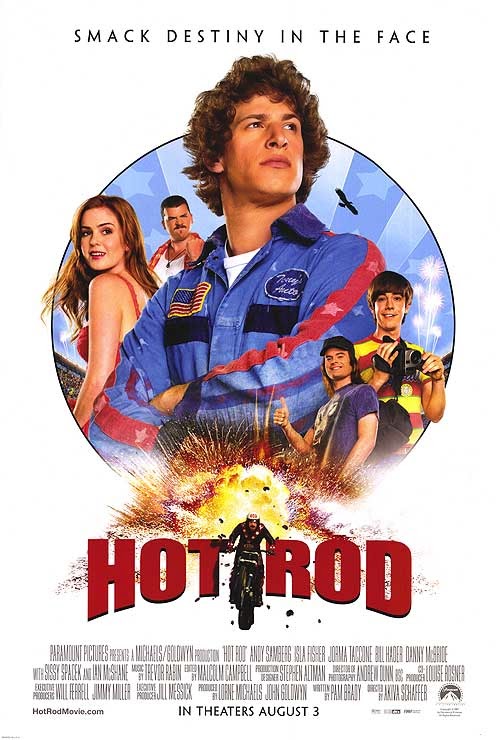 Do you ever find yourself watching a comedy that you fully expect to hate, yet despite all your assumptions it turns out to be ridiculously, often inexplicably, funny? I feel that way about Hot Rod. I'm not quite sure why I rented it from a video library a few years ago, but I'm glad I did, because it wound up being remarkably funny and occasionally very weird, and it's that special sort of comedy that strikes me as funnier every time I watch it.

Amateur stunt performer Rod Kimble (Andy Samberg), aspires to be one of the great stunt artists like his father - who died testing motorcycles for Evel Knievel. With his crew of mostly incompetent friends - Rico (Danny McBride), Dave (Bill Hader), Denise (Isla Fisher) and half-brother Kevin (Jorma Taccone) - he spends his days failing to achieve trick stunts and jumps on his beated-up moped. When Rod's stepfather Frank (Ian McShane) - with whom Rod has a constant antagonistic and violent relationship - is diagnosed with a serious heart condition, Rod decides to undertake the jump of a lifetime to raise the necessary funds for a heart transplant.

I'm not quite sure for what the makers of Hot Rod were aiming. It was originally developed as a vehicle for Will Ferrell, and that fact is obvious in the film's premise and a lot of its jokes. When Ferrell passed on it, however, it was given to Saturday Night Live performers The Lonely Island to re-write, direct and star in. The result is something much, much weirder, with many jokes that often don't make any form of rational sense (about a minute and a half is consumed by two characters saying "cool beans" to each other). Certainly it was weird enough that when the film was released in 2007 audiences pretty much stayed away en masse.

It's also difficult to pin down the details of the setting: some scenes make it clear we're in the present day, while others seem set in the 1980s. Certainly the costuming and music are all deliberately 1980s: Europe get a pretty solid workout in the soundtrack, and does - rather bizarrely - John Farnham's "You're the Voice". On a similar level, the characters are clearly grown adults yet all act and sound like they're still in high school. I suspect enjoying this film will depend in part on whether these constant inconsistencies amuse or annoy. They amused the hell out of me.

The cast give it their all, with several noted comedic performers like Bill Hader and Danny McBride in key supporting roles. Andy Samberg does a deliberately over-the-top and funny performance as the titular Rod, while Isla Fisher is solid as the film's essentially token love interest Denise. Fisher is a gifted comic talent, even if she often fails to be cast in particularly good films (Confessions of a Shopaholic is a key egregious example). I had hoped after her initial Hollywood success in The Wedding Crashers that she might become a big comedy star over there, but for whatever reason she never quite worked out with the American studios.

The funniest actor of the bunch is Ian McShane as the hilariously mean stepfather Frank. Often a respected dramatic actor will take a role like this as an excuse to goof off and slum around for some quick money, but to his credit McShane really commits to this. He's got the funniest character and the funniest lines, and delivers them in a faultless manner. He's pretty much the biggest reason that I keep coming back to the movie.

Reviewing comedy is always difficult, because humour is incredibly subjective. All I can say is that this is a solid American comedy made special with some really off-kilter moments, and a stand-out performance by Ian McShane that makes me laugh harder every time. Your mileage, as always, may vary.
Posted by Grant at 11:46 AM