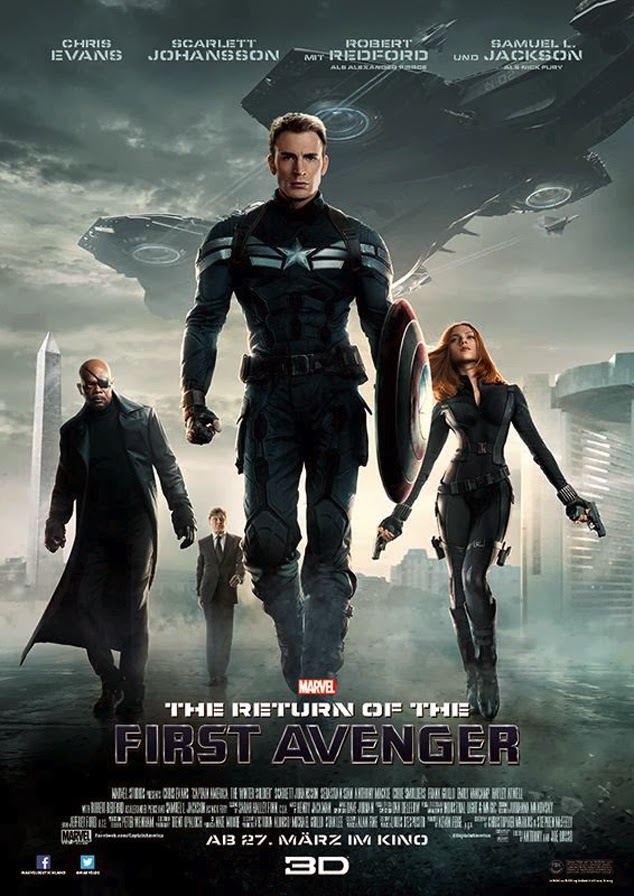 It's a pretty good indication of how cleverly Marvel Studios are producing and marketing their movies that they can have two films released in one year, both set in the same fictional universe, both grossing more than half a billion dollars worldwide, and one is Guardians of the Galaxy and the other is Captain America: The Winter Soldier. One's an espionage thriller with superheroes in it, and the other's a sci-fi action comedy starring a talking tree.

I missed The Winter Soldier at the cinema, so it's only now that I've caught up with it on home video. It's really very good. I was not a fan of the first Captain America film, which took much too long to get to the interesting bits and then ended without a proper climax, but it was well anchored by Chris Evans as super-soldier Steve Rogers and did set up the character for a more interesting adventure here.

SHIELD is about to launch a pre-emptive strike network to combat international terrorism. When SHIELD director Nick Fury (Samuel L. Jackson) realises something is going wrong with its implementation, assassins violently take him out of the picture. His last words were to Captain America, who subsequently finds himself on the run from his own government, aided only by fellow Avenger Black Widow (Scarlet Johanssen) and a retired Afghanistan War veteran (Anthony Mackie).

This is basically The Dark Knight of the Marvel Cinematic Universe. I don't say that because both films are somewhat over-long (although they both are), but because they both take a well-established, seemingly secure foundation from an earlier film (or films) and then smashes that foundation to pieces. By the end of The Winter Soldier SHIELD has been broadly dismantled, American national security is in disarray, and the film's various superhero protagonists are all headed off in different directions. It's a monumental act of toy breaking, but it's one that works because while it removes the safety net that's underpinned many of the preceding Marvel movies it also opens up storytelling opportunities.

Chris Evans is remarkably charismatic as Steve Rogers, as is Scarlet Johanssen as Natalya Romanov. They share great chemistry in this movie, represented as close friends rather than romantic partners - that's always refreshing. Johanssen gets so much to do, in fact, that it's difficult to work out why Marvel simply haven't spun Black Widow off into her own franchise. Johanssen has made it clear in interviews that she's happy to get the promotion, so I can only assume the problem is that Marvel Studios have earned so much money from their films that they simply don't want to earn any more.

The supporting cast are very strong as well, particularly Anthony Mackie as Falcon and Robert Redford as SHIELD overseer Alexander Pierce. I have no idea how Marvel convinced an actor of Redford's reputation and stature to make this movie. I assume it involved backing up a truck filled with money. However they managed it, he gives a weight to the character that it might otherwise have lacked. Samuel L. Jackson plays, well he plays Samuel L. Jackson, right down to his hilarious tombstone inscription.

The action sequences are shot incredibly well, managing to keep a lot of the intensity you get from post-Bourne shakycam thrillers but pulling the camera back enough for the audience to actually see what's going on. When the over-the-top climax arrives it is almost a disappointment, since the film had been going so well on more conventional punch-ups and shoot-outs up to that point.

This is not a perfect film, but it's an incredibly solid and entertaining one. It's smarter than your average blockbuster, has a wealth of funny one-liners, a good sense of character and a very deft ability to move chess pieces around a board to both satisfy the needs of a self-contained story and to prepare the way for a third film in 2016. I look forward to it.
Posted by Grant at 6:51 PM