Star Trek: The Next Generation: "The Vengeance Factor" 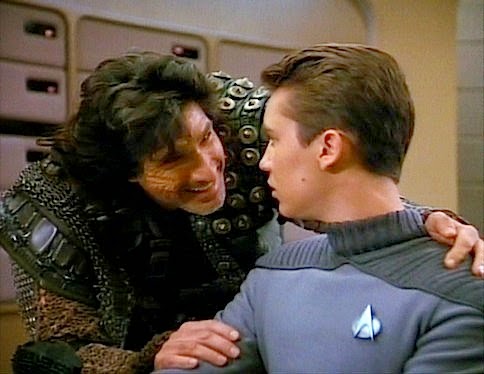 When a Federation outpost is attacked by a group of maurading 'Gatherers', Picard orders the Enterprise to their home planet of Acamar. There he convinces the Acamarian leader to engage in a peace negotiation with the exiled Gatherers, and finally bring about peace after centuries of clan wars and tribal conflict. While the negotiations progress, however, it becomes clear there is a murderer in their midst.

"The Vengeance Factor" is a weird episode. I found it weird because it is based on a hopelessly generic and dull premise, with characters who are written as perfunctory cyphers to enable a perfunctory story. It should be tedious in the extreme.

Except it's halfway to being the opposite. The story is dull - that much is certain - but the episode kept tripping me up with little scenes and moments that showed a lot more depth and imagination. There's a beautifully played scene in Ten Forward between Wesley Crusher and Brull, one of the Gatherer leaders. Brull is coarse, rude and irritating. Wesley is visibly irritated, but then immediately guilty when called on his prejudice against Brull's behaviour. The resulting conversation gives both characters depth: it shows that there's something more to Brull, and it allows Wil Wheaton to actually act for a change. He really is one of The Next Generation's greatest assets, and was tragically overlooked or worse by the series' writers.

It's funny how the Gatherers are essentially played as a conservative person's vision of what a heavy metal fan must be like. They were leather, studs and patches, and have unshaven faces, tattoos and long, greasy hair. The actors involved - chiefly Joey Aresco and Stephen Lee - know what they're supposed to be playing and over-act wonderfully.

Over on another plot thread, Commander Riker gets to chat up one of the Acamarian leader's servants. I'm not sure why, but I always laugh at how Jonathan Frakes plays these scenes. He plays Riker as a vaguely sleazy lothario, as if he knows this sort of pseudo-James T. Kirk behaviour - while perfectly fine in 1960s society - is already inappropriate in the late 1980s. (This episode is, by the by, the final 1980s episode of Star Trek.) It's as if he's deliberately sabotaging his own scenes in the best possible way: Riker might be a ladies man, but Frakes enables us to laugh at him at the same time. Of course this week's brief affair ends very sadly for him when his new girlfriend turns out to be the murderer for whom everyone is looking. Who'd have guessed? (The answer being everyone, as the episode doesn't even bother to hide her identity.)

Had this episode played its storyline earnestly, it would have been an awfully dull watch. Because the actors play with their material, and Sam Rolfe's teleplay occasionally gives them glimmers of depth and humour, it winds up being oddly watchable. I'm giving it the thumbs-up, even if it's a slightly wavering and confused thumbs-up. We're nine episodes in, with five good ones and four bad ones. That gives Season 3 a quality ratio of 56%, which seems low - thankfully there's time for the season to pick up.

Trivia time: this episode's writer, Sam Rolfe, was the creator of the popular 1960s adventure series The Man from UNCLE. This was one of two Star Trek episodes he wrote; the other was the Deep Space Nine episode "Vortex", reviewed here.
Posted by Grant at 10:00 AM