Doctor Who: "The Wall of Lies" 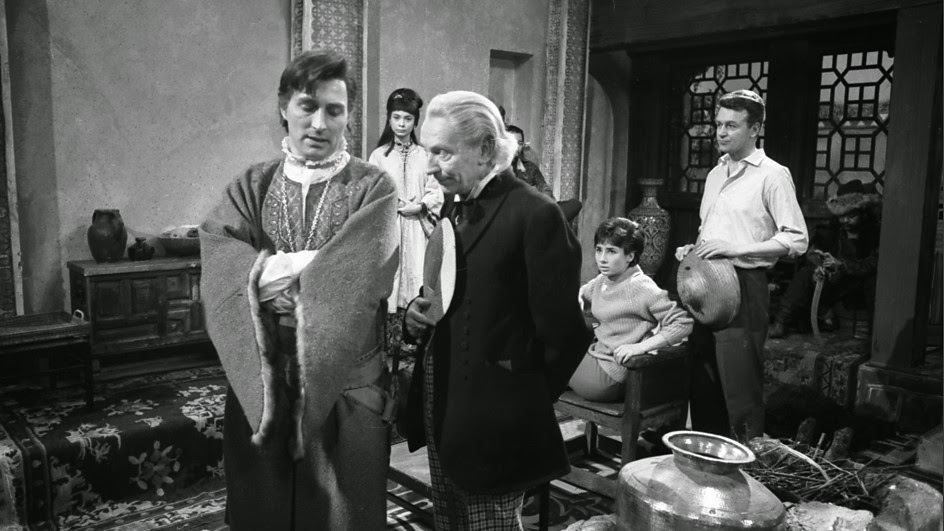 It's 14 March 1964, and the Doctor and his companions remain the unwilling guests of Venetian explorer Marco Polo.

While Barbara is rescued from the Cave of Five Hundred Eyes, her companions fail to convince Marco that Tegana is working against him. What's worse, it's Tegana who proves the Doctor is entering the TARDIS without Marco's knowledge using a secret second key. With Marco furious and the second key confiscated, escape from 12th century China seems even further away than ever.

We've moved from the Himalayas down the Lop, then across northern China to the Gobi Desert, and now this sprawling epic serial reaches the Great Wall at last and beyond that the bamboo forests by the Yellow River. It's really quite surprising when you add up the length of time spent by the characters in Marco Polo's company. This journey has already taken weeks, and they've still got a way to go.

There's less in the way of exotic locations in this episode, and a lot more attention paid to the characters. This is a very political episode, with the Doctor, Ian, Susan and Barbara doing their best to evade Marco's surveillance and escape via the TARDIS, Marco making sure that his prized 'magic caravan' isn't taken away from him, and Tegana continuing to plot all of their deaths. It's well played and well written stuff, presenting less of a children's adventure serial and more of an adult drama.

It's not a perfect episode: for one thing it's beginning to stretch credulity that Marco remains ignorant of Tegana's plots. Tegana is off setting up another one this week, conspiring with a group of bandits to murder the entire caravan train in their sleep. Much better played is the Doctor's arrogant exasperation that, despite his intellect and technological knowhow, he lives and dies at the mercy of a comparative savage. It's interesting that even this far into the series, the Doctor is still very much a supporting player in his own series. This is very much the "Ian and Barbara Show" through these early episodes, although thankfully Jacqueline Hill and William Russell are more than up to the task. Barbara in particular is a brilliant companion: intelligent, and well-written and performed.

We're at the mid-point of "Marco Polo", and it's far and away the best serial that Doctor Who has produced thus far. This is another excellent instalment, and leaves Series 1 with 14 good episodes out of 17. That's a quality ratio of 82%.
Posted by Grant at 7:28 AM