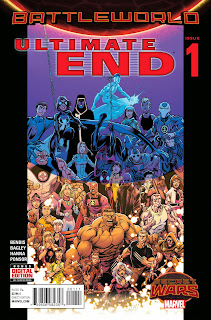 I made a terrible mistake. I had become increasingly bored by the glacial storytelling and constant disappointment of Miles Morales: The Ultimate Spider-Man. Despite loving the character and reading Miles' adventures since the debut of Ultimate Comics Spider-Man a few years back I had made the choice that this was the end, and I couldn't waste money on reading such irritating comics any more. Then Marvel released this, the first issue of a final Ultimate Universe mini-series, and I figured I could find it within myself to give Bendis one more chance with the character - a last hurrah, if you will.

I made a terrible mistake.

Ultimate End #1 is a confidence trick: a book that promises to close off the Ultimate Universe yet focuses instead on the massive Secret Wars cross-over that Marvel has been publishing this past month. It doesn't have a proper opening or introduction: instead you're thrown into an angry debate between a dozen or more self-similar superhero duplicates. It doesn't even appear to have Miles Morales in it. It does have Peter Parker's Spider-Man, but it took me half the issue to work out whether Bendis was writing the original Marvel Universe Parker or the identical Ultimate Universe clone Peter who had prominently appeared in the last few issues of Miles Morales.

Mark Bagley does a great job illustrating the book, but in all honesty who cares? Without having read Secret Wars in advance, this book is patently unreadable. And that's the bare minimum I expect from a comic book: a comprehensible story. Not even a good one - just one I can read. And this, as I've said, is unreadable. (1/5)

Under the cut: the final reviews for this week, including Daredevil, Doctor Who, Jem and the Holograms and Usagi Yojimbo.

Over in the main Daredevil comic, Foggy Nelson has been ghost-writing Matt Murdock's autobiography. That's given Marvel the excuse to publish this extra-length special issue, in which two previous Daredevil cases get recounted by Matt and Foggy as they go about writing their book. The first story, "Worlds Collide", is an excellent story from Daredevil's early days, in which Matt is forced to defend a man accused of murder - and who was caught by Daredevil. It deliberately explores the problems a man might face if he was an urban vigilante by night and a defence lawyer by day, and it's an intelligent, highly entertaining story. The second storyline, "Chasing the Devil", is much more truncated and suffers terribly as a result. It's Chris Samnee's debut pulling double duty as writer and artist, and while he shows a lot of promise his story simply can't fit into its limited page count in a satisfactory fashion. This book is worth it for the first storyline, but it's also pretty expensive at US$4.99. (4/5)

Doctor Who: The Eleventh Doctor #12

In the main this is an entertaining opening to a new storyline in which Roman Europe is invaded by an alien menace - precisely which one it is I'll leave for people to find out on their own. The characterisation is good, the opening action sequence is great, and Jones... gah. All the good work is pretty much destroyed by the most tedious running joke in which Jones, a comics-exclusive companion of the Doctor, goes through joke after joke after joke about how he's basically a thinly veiled parody of David Bowie. The problem is that the joke wasn't funny back when it started 10 months ago, and it's still not funny now. It's severely interfering with my enjoyment of the comic. I really, really wish they'd stop it. (2/5)

Jem and the Holograms #3

The trailer to the upcoming live-action film adaptation of Jem and the Holograms looks like the film is to be a soulless and generic waste of opportunity. Such a shame that they didn't simply work to the template provided here by Kelly Thompson and Sophie Campbell. This really is Jem rebooted for the 21st century, bringing in social media, non-heteronormative sexuality and superbly over-the-top, utterly delightful character designs. We're three issues in now, and if anything this comic is getting better each month. (4/5)

After a three-year break Stan Sakai has finally returned to Usagi Yojimbo with a new storyline but the original numbering. This is issue #145, but there is absolutely nothing you need in terms of backstory other than to just pick this comic up and read from here. Usagi Yojimbo is a masterless samurai in feudal Japan. He's also a rabbit, and he's accidentally run into a pair of thieves just after they've robbed a noble household and a ninja who was robbing it at the same time. It's got a breezy tone, and absolutely wonderful black and white artwork. Sakai is one of the masters of American comic book storytelling. I think anybody with an interest in comics should check out his stuff at least once - although once you've checked it out there's a good chance you'll be hooked for good. (5/5)
Posted by Grant at 11:14 PM