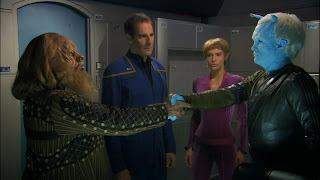 Captain Archer struggles to salvage the Andorian-Tellarite peace negotiations in the face of overwhelming odds: a Romulan drone ship is still roaming the area, with Trip and Reed still trapped onboard, and Commander Shran's first officer and lover has been killed by one of the Tellarites, leading him to demand revenge. There's only one way to track down the drone ship, and that method will require ships from the humans, Vulcans, Tellarites and Andorians. That level of interplanetary cooperation has never previously been achieved.

"United" is the second part of Enterprise's "Babel One" trilogy, and combines action - both space battles and fisticuffs - with generous helpings of Star Trek historical lore. While the series is continuing to swallow its own tale with continuity references, and I think this episode might contain the densest collection yet, it's managing to be entertaining sci-fi adventure at the same time. To an extent this episode's all "inside baseball", but given that the hardcore were pretty much the only ones left watching the series at this stage that's not necessarily the disaster it could be.

This is one of those rare Enterprise episodes where all of the attempts to make it a prequel with some historical weight actually pay off. The sight of Archer, T'Pol, Shran and the Tellarite ambassador Gral agreeing to work together, and to negotiate a long-standing peace, sort of creeps up on you - and then you realise that the United Federation of Planets begins here. I've watched Star Trek all my life, and the Federation's been name-checked all the way through the original series, The Next Generation, Deep Space Nine and Voyager. All of a sudden we see it all begin, and it's a marvellous moment. I've been pretty harsh on Enterprise and the way it's continued to pull in all manner of continuity references. Credit where it's due: in this episode it genuinely works.

This episode also answers one of the long-running questions about the Federation, which is this: why did Earth became the de facto leader of the entire Federation? In production terms it was always obvious: the audience are all humans, therefore the series is easiest to make and easiest with which to relate if the humans stand front-and-centre in the fictional universe. Here, however, we finally get an in-universe answer: the Andorians hate the Tellarites and the Vulcans, the Vulcans don't trust the Andorians, and the Tellarites seem to hate nearly everybody. As the newcomers to interstellar travel, the humans haven't had the chance to upset anyone, and become the default glue that holds this new alliance together. It actually makes a lot of sense.

The Romulans still feel a little awkwardly shoe horned into the narrative, for reasons I explained last time: continuity-wise they're close to impossible to insert into the story. It's interesting to see the Romulan Senator is flanked by Reman bodyguards - a revision to the Romulus back story introduced in the film Star Trek: Nemesis. This has been the first chance for the TV Star Trek to include them.

The episode's best sequence is it's most old-fashioned. Commander Shran has demanded the Tellarites accept a ritual duel so that he may avenge the death of his first officer. The rules of the duel allow participants to submit a champion in their stead, and Archer - looking to stop this blood feud in its tracks - volunteers to act as champion to the Tellarites. This elaborate knife-fight is about as close to the original Star Trek as Enterprise has ever come: it's basically Spock versus Kirk in "Amok Time" all over again. Given the time spent fleshing out Shran to the audience the sequence is very effective and entertaining.

And this episode marks goodbye to David Livingston: this was his last of 63 episodes of Star Trek directed over 14 years, including "In the Hands of the Prophets", "The Visitor", "Homefront", "Flashback", "Future's End" and "Equinox". Captain Picard's pet lionfish Livingston was named in his honour.

Two great episodes in a row has me hopeful that this third trilogy of the season might actually be a winner. This is the seventh good episode out of 13, bringing the quality ratio up to 54 per cent. A cliffhanger leads us into a third part: the drone pilot operating remotely from Romulus is not a Romulan at all, but a red-eyed, white-skinned Andorian. Curiouser and curiouser.
Posted by Grant at 10:37 AM