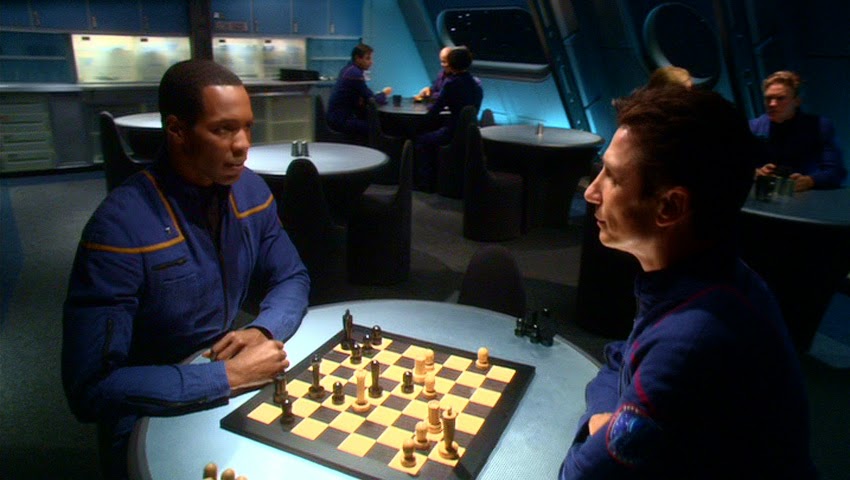 Commander Tucker (Connor Trinneer) and Ensign Sato (Linda Park) return from an away mission suffering from an unexplained alien infection. While Dr Phlox (John Billingsley) races to save their lives, the crew's action are observed by a pair of non-corporeal life forms capable of possessing and controlling anybody on the ship.

After so many disappointing hours of television in Season 4, "Observer Effect" comes as a tremendous relief. Here's an episode that is well performed, tightly written and dramatic, that manages to play with old Star Trek continuity in an interesting fashion, and which doesn't feel shoe-horned in or weirdly disrespectful to the franchise's past. This is also entirely achieved without building a single new set, or hiring a single actor outside of the regular cast. That's actually a rather impressive achievement.

Locking Tucker and Sato into quarantine together gives the series a much-delayed opportunity to explore Sato's background and her life prior to joining the Enterprise. After four years some might accuse the series of dragging its feet in this regard, but I suppose it's better late than never. It could be worse - this episode gives Anthony Montgomery the most material to perform that he's ever had in three-and-a-half seasons, and the tragedy of it is that he isn't even playing his own character.

Both Montgomery and Dominic Keating spend most of the episode with their regular characters - Mayweather and Reed - possessed by hyper-intelligent, emotionally detached Organians. They first appeared all the way back in "Errand of Mercy", a popular episode of the original Star Trek that - among other things - introduced the Klingons for the first time. What makes this episode work so much better than other Season 4 continuity-fests, however, is that there is absolutely no need to have seen "Errand of Mercy" in order to enjoy "Observer Effect". They could have been any number of non-corporeal creatures, but since the Organians were sitting there and fitted the storyline they were dropped in as a little tip of the hat to hardcore fans.

The regular cast do an outstanding job with the Organians. While it's Montgomery and Keating who do most of the heavy lifting, another four members of the cast get to play them as well. Despite six actors playing two characters, the Organians feel like consistent and believable characters throughout the episode. I actually had to pause when I realised that there wasn't a single guest actor in this entire episode - it really does feel like there should be two of them.

I think less episodes like the Vulcan trilogy and more episodes like this might almost have saved Enterprise for a fifth year. Sadly it was not to be. At this point we've got 11 episodes to go in the entire series. As for Season 4, we're 11 episodes in with five enjoyable episodes so far; that makes for a quality ratio of 45 per cent.
Posted by Grant at 10:52 AM