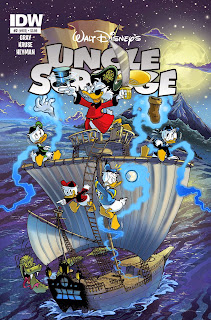 IDW really haven't wasted time in releasing another lengthy issue of Uncle Scrooge. It remains tremendously good value for money, with each issue containing three stories translated from the popular European comic books. I'm not quite sure why Disney's characters have remained so popular in Europe over the decades - they've pretty much never been out of print, with new storylines published all the time. It's nice to finally see some of them come out in English. This month's stories were originally published in the Netherlands.

The lead storyline, which sees Uncle Scrooge and his nephews kidnapped by a ghostly pirate ship, is broadly entertaining, but a few pop culture reference stick out a bit too obviously and the tone of the piece is a little inconsistent. Still, it's nicely illustrated with clean panel layouts, and I suspect its target market will enjoy it all the same.

I actually preferred the third storyline (the second's basically a one-page gag), in which a crashed meteorite makes everyone who gets close to it fall under its charms. It has the consistency of tone that the first storyline lacked.

IDW are going to town with these Disney reprint books, with a Donald Duck comic starting this month and a Mickey Mouse one coming in June. As far as I'm concerned, the more children's comics on the market the better. Kids, kids at heart, and Disney enthusiasts are all going to have a blast. (3/5)

Under the cut: reviews of Imperium, Star Trek, Unity, X-O Manowar and Zombies vs Robots.

This issue begins with a sensational bit of science fiction horror that is beautifully (actually not sure that's the most appropriate word given some of what happens) illustrated by Doug Braithwaite. It's enhanced particularly well by Brian Reber and Ulises Arreola's colours, which are rich and atmospheric. The story is developing nicely too, with a powerful psychic super-villain slowly establishing his own Africa-based utopia and a high-tech military team tasked with defeating him. It's well paced, engaging and morally complex. Great stuff. (4/5)

The Enterprise crew have been betrayed by the trader Eurydice and sold off to an alien intelligence known as the Syndicate. Now Captain Kirk has to find a way to convince the profit-motivated species to let him and his crewmates go. This is a reasonable conclusion to the story. It does exactly what you'd expect it to do, but of course that only satisfies to a certain extent. Generic and competent is only going to get you so far, and I'd love to see Mike Johnson attempt a more ambitious or original storyline than what he's presented here. Tony Shasteen's artwork is fairly solid, but does betray a few too many photo references as it goes. If you want to see some further adventures for the current reboot crew, this book might suffice. If you want something more interesting, there are definitely more interesting books out there. (3/5)

The Unity team set out on a recruitment mission, aimed at a prison escapee with alien armour and severe emotional adjustment issues. It ends violently. That's right: this is your run-of-the-mill superhero fight issue, which generally brings it a fair degree of satisfaction and entertainment. Since the script by Matt Kindt is fairly average, it's down to Pere Perez to impress with solid artwork and Andrew Dalhouse to absolutely excel with some rich, subtle colouring. All up, it's a fun, good-looking read. (3/5)

Dead Hand is on a collision course with Earth, and X-O Manowar is powerless to stop it unless he can find some help. I am really enjoying this series. It is superhero adventure played out on a large, interplanetary stage, and Robert Venditti is doing a really stunning job with it. In fact it's much better than the stuff he's been writing for DC Comics of late, which makes me wonder why. Is it the fresher character? Better editors? Whatever the reason it's really working for him, and this issue builds to a great climax: issue #37 can't come soon enough. Diego Bernard's artwork is great, and really sells the scale of the storyline. (4/5)

Two serialised instalments tell a pair of stories about a future Earth where humanity is almost entirely extinct, and where robots fight it out against hordes of zombies. The scripts by Ryall and Niles are pretty light-hearted and engaging, and the art by Diecidue and Mayerik (with a little bit by co-creator Ashley Wood) is inventive and appealing. You'd think by now that the zombie craze would have died down, but to be honest this book feels a lot more focused on the robots than the hordes of shambling dead people. I think it's a lot better that way around. (3/5)
Posted by Grant at 8:28 PM