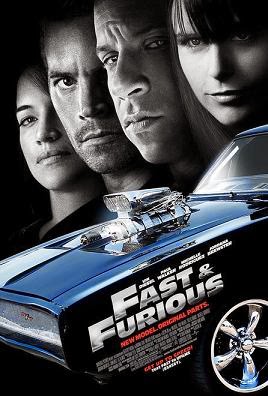 The Fast and the Furious was a weak action film that broadly plagiarised Kathryn Bigelow's Point Break by simply replacing surfboards with cars and Patrick Swayze with Vin Diesel. It was a moderate hit back in 2001, and its success led to an even less accomplished sequel: 2 Fast 2 Furious. That film kept co-star Paul Walker but lost Diesel. The third film, The Fast and the Furious: Tokyo Drift, pretty much lost everything bar the basic concept of illegal street racing. That's the point at which I tapped out, and left the franchise to do its thing without me.

Then I started hearing genuinely surprising things about the subsequent movies: that the unexpected fourth film, that reunited Walker and Diesel, was actually pretty good, and that from the fifth film onwards it had somehow metamorphosed into one of Hollywood's most entertaining action franchises. Given the fairly lacklustre experience of the first three films I was never in a particular hurry to find out if this buzz was accurate, but with the runaway box office performance of Fast & Furious 7 I finally decided to rent the previous three films and check them out for myself.

Fast & Furious picks up some years after car-racing bandit Dominic Toretto (Diesel) and FBI agent Brian O'Connor (Walker) last crossed paths. They meet again in Los Angeles, as each investigates the same powerful drug kingpin. For O'Connor it's the culmination of a long-term investigation. For Toretto it's a mission of revenge, after one of the kingpin's associates murdered Toretto's girlfrient Lettie (a surprisingly under-utilised Michelle Rodriguez).

First and foremost it's worth noting that Fast & Furious, despite its odd title, is easily the best of the first four F&F movies. It has a better, slightly more original screenplay, and more interesting action, and better dialogue. Its cast have also developed, particularly Paul Walker who has actually matured by this point into a reasonably engaging leading man. Vin Diesel remains, broadly speaking, Vin Diesel: a highly effective action star with a photogenic quality and a rumbling voice only whales can hear.

The plot cleverly reunites its leads in a believable and measured fashion, and gives each of them strong, understandable motivations throughout. It even manages to include a couple of interesting, albeit not entirely unexpected, plot twists as it goes.

What's odd is how unengaging the car chases are compared to the rest of the film. High-speed street racing is pretty much the franchise's raison d'etre, yet here they feel more than a little perfunctory and tiresome. The film itself is pretty enjoyable, but whenever its cast jump into their cars my level of interest dropped considerably. This is particularly the case with two lengthy chase sequences through a series of mining tunnels. That it happens once is okay - it's a sequence over-reliant on CGI, and a little bit silly, but distracting enough to get away with it - but then during the climax we return to the same tunnels for a very similar sequence. It's oddly redundant.

The film ends in an interesting place, with a strong set-up for future sequels. I finished each of the earlier films generally bored, and a little unimpressed. I finished this one rather keen to find out what happened next. It's a surprising and welcome turnaround for a franchise's fourth instalment.
Posted by Grant at 11:25 AM