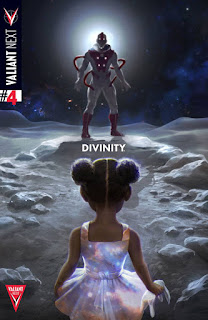 Valiant continue to release some of the best superhero comics on the market. Divinity is just one of them. This week it concludes its initial four-issue run, although a second miniseries has already been announced for later in the year. It's been genuinely good stuff, and I think this fourth issue is probably the best.

The book follows Abram Adams, who travelled into space as a cosmonaut only to return to Earth 50 years late and gifted with godlike powers. The superhero team Unity have been sent to capture and contain him, but as of the end of issue #3 he was pretty much running rings around them. This issue concludes that fight.

It's wonderfully written, because at its heart this issue showcases a man who's simply decades too late to recover what he wants. The ending is bittersweet, and the journey there is carefully told and very well developed. The artwork, by Trevor Hairsine and inker Ryan Winn, shows remarkably subtlety in the characters: their movements and expressions are lifelike and rich in detail.

This comic has been a fascinating experiment: what would happen if a godlike super-human did suddenly arrive on Earth? How would people react? What effects would they have. Based on this issue, it looks like the impact of Divinity's arrival is going to have some pretty huge ramifications for the Valiant Universe. (5/5)

Under the cut: reviews of Hellbreak, Ivar Timewalker, and The Life After.

This book has such a neat hook: if someone gets possessed by a demon, before the exorcist can remove it a crack team of specialists have to go into hell itself to locate the person's soul and bring it back to the realm of the living. It's basically the supernatural Stargate. It's inventively told, with Bunn giving hell an entire ecosystem of creatures and lost souls, and - as this issue reveals - something else entirely. Brian Churilla's artwork is stark but effective. This is a great comic that deserves as wide an audience as possible. (5/5)

Dr Neela Sethi used to travel with Ivar Timewalker through history - now she's been united with her future self, who wants her to actually invent time travel. It all seems fishy as hell, which is why it's probably for the best that Ivar is teaming up with two immortal warriors to rescue her. This is, for all intents and purposes, Doctor Who in the Valiant Universe. We've got an eccentric time traveller with a penchant for odd,old-fashioned clothes, and a female companion who's been travelling with him. Of course Ivar's a much less responsible character, but if you're a fan of the one there's a good chance that you'll dig the other. This is really fun stuff, and Francis Portella's artwork is dynamic and expressive. (4/5)

Since I reviewed the last issue of The Life After, artist Gabo was nominated for the 2015 Russ Manning Award - and it's a nomination that's very well deserved. This issue is a particular showcase for Gabo's talents, with huge splash pages all over the place. This is Oni's second comic about Hell released this week, but this one is a much stranger, more arthouse sort of a beast. I'm absolutely loving how inventive it all is, and how effortlessly Fialkov's script bounces from comedy to tragedy to all-out action. (4/5)
Posted by Grant at 10:41 PM