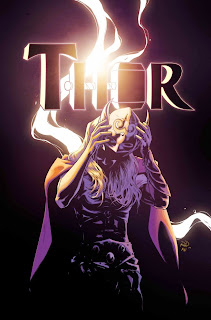 It's taken eight issues, but with Thor #8 writer Jason Aaron and artist Russell Dauterman finally reveal the secret identity of the new Thor. I shall not spoil her identity here, but given the news got spoiled all over the Internet at the beginning of the week it won't be hard for you to look it up if you're keen.

The issue begins with a knock-down fight between Odin's Destroyer and pretty much the entire female cast of the Marvel Universe. It's a powerful statement to match the new female Thor, celebrating and promoting strong, powerful women in Marvel, and it certainly acts as a strong climax to this first story arc.

Then there's the revelation of Thor's true identity, which is possibly not the most surprising choice but is certainly one that adds an enormous complication to the character going forward. It's well revealed, and is a powerful moment. Overall the book still feels maddeningly slow, but at least we've made some solid progress through the story with this issue. Hopefully once it returns after Secret Wars things will pick up ever further. (4/5)

It's date night gone terribly wrong in Copperhead this month. I really liked this issue a lot: the first story arc of this science fiction western set up a lot of character very well, but now this second arc is actually expanded on them and giving them depth and nuance. The whole "space western" schtick might be an acquired taste - certainly it's a lot more on the nose than Whedon's Firefly, for example - but Faerber is writing a damn good story with it. Scott Godlewski's artwork is really solid too, and is nicely enhanced by Ron Riley's subtle colours. (5/5)

This issue, while competent and entertaining to begin with, rapidly falls into a sort of messy lead-in to next issue. The Emperor is testing out replacements for Vader, and to be honest those replacements don't seem in the least bit interesting. I'm still really liking the absurd supporting cast Gillen has developed for this book - two homicidal droids and a star-struck archaeologist - but they could all be much better applied than they are here. Nice Larroca art though. (3/5)

Way back in 2012, the first issue of this series was released under the title Collider, until a trademark objection saw the book get retitled from issue #2. It's clear now how appropriate that original title was, and how utterly inappropriate the replacement was. The FBP concept hasn't really been a factor in the series for a while now, and instead we're going through apocalyptic end-of-the-universe scenarios, shifting realities and life or death crises. Right now the book is the best it's ever been, but looking back over the last two years it's difficult to see a clear narrative through-line. Whenever this series wraps up I can't see it being remembered as one of Vertigo's greats, but I am enjoying it while it lasts. (3/5)

Giant Days has clearly been a big success for Boom Studios, because this six-issue miniseries about three undergraduate students just became a 12-issue series. I'm not surprised. It's got likeable characters, funny dialogue, appealing artwork by Lisa Tremain, and offers the kind of grounded, humorous story that you don't get to see very often from the larger independents. This issue sees Esther go out for a night of partying, and finding herself ranked on a sleazy campus website the morning after. Given recent problems many women have had reporting online harassment to the police, Esther's attempts to get the site shut down via university authorities has a depressing ring of truth. but it's testament to Allison's skills as a writer that the situation can still foster so many good jokes and funny lines. (4/5)

Kamala has been betrayed and kidnapped by her new boyfriend, and intimidated into joining an Inhuman revolution against Medusa - as if Kamala's going to go for that. The pop culture references are a little on the nose this month, but thankfully in the main this is an exciting little climax to Kamala Khan's latest adventure. In many ways this book is doing what Buffy the Vampire Slayer used to do: take everyday crises encountered by American teenagers and exaggerating them into fantastical action-adventure. It's still one of Marvel's best books. (4/5)

Odyssia's epic voyage continues, even as the gods plot against her. This gender-swapped science fiction retelling of The Odyssey is probably the least accessible comic on the market these days. It's dense, complex, aggressively weird and sexual, with lengthy narration in a sort of free verse, all illustrated by Christian Ward's lush, curved artwork. I absolutely love it, in part because it's such a complex read. It takes me a lot longer to read an issue of this than of most other comics in any given week. Matt Fraction is undertaking a fascinating creative experiment here, and while I'm sure it's not to everybody's taste, now that we're five issues in it's clearly that it's very much to my taste. Weird, but brilliant. (4/5)

The second issue is about as good as the first, and the first was very, very good indeed. I'm loving this: a proper historical comic book that wraps its story around actual events in the American War of Independence. Here we see Seth Abbott continue fighting in a militia against the British, while his new wife Mercy establishes their new home. The contrast between the two protagonists' lives is beautifully displayed, and I really like how Wood gives Mercy so much strength as a character despite her not being involved in the action sequences. Andrea Mutti's art is perfect for this kind of realistic story, while Jordie Bellaire's colouring is faultless as usual. I think this is one of my new favourite comics. (5/5)

Stakes are raised as Marko and Prince IV come under attack, the Brand is ambushed by the Stalk, and Alana appears even more certain to lose her daughter. Beautiful Fiona Staples artwork as always, some nicely emotional twists to the story, and good character work. It's all a bit heavy-going - I do hope there's some light on the horizon before the story gets too depressing. When it's firing along well, this really is a great comic. I wasn't the biggest fan of Volume 4 (issues 19-24), but I am glad I stuck around to read this next arc. It's been great. Great cover too. (4/5)

Braith continues to investigate her sister's death, while events on the Southern Cross grow stranger by the hour. Becky Cloonan is drip-feeding plot elements in a very clever fashion: each issue answers a bit more, but also reveals additional mysteries. As a result it's been constantly engaging stuff: a science fiction mystery that keeps threatening to spill over into horror. Belanger and Loughridge's artwork is distinctive and interesting: not quite the sort of art one expects to see in this kind of sci-fi story, but undoubtedly effective. (4/5)
Posted by Grant at 12:31 AM