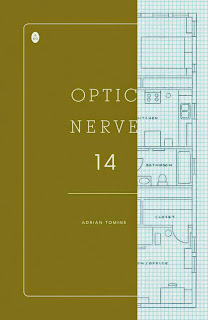 Since April 1995 Adrian Tomine has been writing and drawing Optic Nerve on one of the slowest schedules of pretty much any major comic book. Not that he's been any kind of slouch: in between he's written and illustrated a raft of acclaimed graphic novels as well as extensive work for The New Yorker. This week the 14th issue of Optic Nerve was finally published, and it's predictably an absolute knock-out.

In "Killing and Dying" a father and his teenage daughter struggle to relate to one another as she embarks on an attempted career as a stand-up comedian. It's a perfectly observed character piece, told through dialogue and a stream of tiny panel layouts. It's deeply melancholic, and almost perversely banal, but page by page it wins you over, making you relate very deeply to both the daughter and her awkward, constantly wrong-footed father.

In "Intruders" a man desperate to reconnect to his past life uses a spare set of keys to break into his old apartment while it's new resident is at work. It's a much darker story, presented in a heavily narrated fashion, and has sharply different tone and aesthetic to "Killing and Dying". It's testament to Tomine's talent that two vastly different comics can be released in the same single issue.

Comics like this demonstrate just how versatile the comic book medium is. Why I can't deny I have a lot of love for superhero adventure books, it's so refreshing to read something like this now and again to remind myself just how great the medium can be. This is easily one of the best comic books I've read this year. (5/5)

Ray Garrison continues his hunt for the spree killer who appears to possess Bloodshot's powers, haunted all the while by a ghost and an imaginary friend. Jeff Lemire is writing an absolutely brilliant book here, taking a superhero concept and transforming it into a grounded, gritty kind of horror story. Mico Suayan's visuals are what really sells the book though, giving everything a realistic edge that works well with Lemire's story. Plus in a stroke of genius the ridiculous Bloodsquirt, a cartoon character imaginary sidekick for Ray on his journey, is drawn by Jeff Lemire and inserted into Suayan's art. The combination is immensely effective. This is far and away Valiant's best book right now. (5/5)

With the barriers between cities down, Katar and Shayera fight against a horde of future Earth rat and bat people to save their friends. Now I've stayed pretty much entirely out of DC's Convergence event. The story didn't interest me, and certainly the numerous negative reviews have kept me away over the past two months. I tried out Hawkman because I'm a huge fan of the characters, and relished the chance to see them in action for two more issues. Sadly the book really isn't worth it: the characters are there, but the tie-in to Kamandi: The Last Boy on Earth is wasted so egregiously you'd be forgiven for failing to notice a tie-in is there at all, and the book doesn't so much end as stop. The whole exercise smacks of a missed opportunity, with lots of popular characters and series temporarily returning, but without any proper stories in which they can feature. Roll on June, I say, and hopefully DC can launch some properly entertaining storylines again. (2/5)

Martin Brundle remains trapped in quarantine as the scientists and orderlies around him all succumb to the viral infection and begin to mutate. With the clock ticking down before the military exterminate everybody, he's no closer to finding a cure. This excellent sequel to The Fly II isn't just vastly superior to that film, it's effectively Aliens to The Fly's Alien. It's fantastic body horror, and each issue feels like it's been more effective than the last. Menton3's illustrations are fantastic, sitting somewhere between a photo collage and Ben Templesmith. (4/5)

When we last read Ninjak, it's titular secret agent was plummeting out of a skyscraper window in a pitched fist-fight with an assassin. There's some great artwork in the telling of how he escapes, including some really nice panel layouts. I'm not a huge fan of the character - it really is just James Bond as a ninja - but Matt Kindt has written some very strong action into this that's only enhanced by Clay Mann and Butch Guise's artwork. If strong espionage action is your thing, this is definitely your comic. (3/5)

This is the first I've read of Winterworld, Chuck Dixon's frozen post-apocalyptic drama. The original miniseries was first published 20 years ago, but recently IDW has been publishing all-new material written by Dixon that follow on from that series. Frozen Fleet is a new miniseries, and follows the survivalist loner Scully as he reluctantly helps a 14 year-old girl look for her missing parents. It's effectively written stuff, and features solid art by Esteve Polls. It's nice to see a different take on the post-apocalyptic genre too: all the ice and snow gives the book a really distinctive feel. (3/5)
Posted by Grant at 11:12 PM