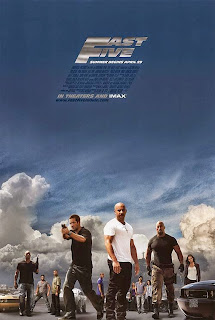 If Fast & Furious represented an unexpected jump in quality from the original The Fast and the Furious, then Fast Five represents an unexpected jump again: this is a tremendously fun movie packed with appealing actors, entertaining action scenes and ridiculous over-the-top stunts. In many respects it's critic-proof: sure the characters may lack realism and often depth, but they do what they're designed to do and they do it in the fastest, most destructive way imaginable. It really is one of those cases where finding the film wanting is likely due to coming to it with the wrong expectations, rather than any fault in Justin Lin's film itself.

After breaking Dominic Toretto (Vin Diesel) from a prison transport, former FBI agent Brian O'Connor (Paul Walker) and Dom's sister Mia (Jordana Brewster) now join him on the run in South America. While holed up in Rio they take a robbery job to get some badly-needed cash, only to wind up lied to and betrayed by the city's most powerful gangster. While they plan their revenge against him - not to mention the biggest robbery of their lives - they also find themselves hunted down by a US federal agent (Dwayne Johnson) sent to capture them.

I'm growing rather fond of the late Paul Walker, who seems to be getting better and better with every instalment. He started his career as one of those actors Hollywood seemed to be cramming down the audience's throat, whether we wanted to see Walker headlining a film or not. Now the Fast films have always been dominated by Vin Diesel, who continues to exert an enormous screen presence in each of them, but it's great to see Walker develop a more relaxed, naturalistic style as he goes.

The supporting cast is about as large as the franchise has had thus far, and it cleverly drags back in characters from the previous four films and forms them into a single unified team. This is an outstanding development: one of the problems The Fast and the Furious had prior to the fifth film was its lack of focus or clear narrative line. There was the first film with Diesel and Walker, then the second with just Walker, then a third without either actor (bar a short cameo), and then a fourth reuniting them again. Here the leads are joined by Tyrese Gibson and Chris 'Ludacris' Bridges from 2 Fast 2 Furious, Sung Kang from Tokyo Drift and Gal Gadot from Fast & Furious. It's a strong signal to the viewer, who's patiently watched through what had been a patchwork series of sequels: now they all have a purpose and they all count for something. To be honest it feels like this is the first film out of the five to have a really strong grounding and a confident idea of what sort of franchise it wants to be.

And it's a franchise that's rapidly evolving. The heavy reliance on street racing and car chases has been replaced by a fresh focus on general action and a heist narrative. Even the film's climatic chase, which is about as effective and gleefully entertaining a sequence as has appeared in the Fast movies, has a strong element of the heist genre to it: a sneaky theft, planned and carefully telegraphed, but then revealed to the audience like an impressive magic trick. There is street racing in Fast Five's story, but director Justin Lin doesn't bother to show it to us. There's no need. There's much more interesting stuff to watch elsewhere in the story.

The film's Rio setting does wonders for its mise-en-scene, whether it's the downtown street scenes or the visual striking hill-side slums. The location was used to great effect in Louis Leterrier's The Incredible Hulk, and to an extent it does feel as if Fast Five is copying some of that film's early scenes, but it's still an interesting enough setting to be worth the theft.

Finally there's the introduce of Dwayne Johnson as Luke Hobbs, the no-nonsense and relentless federal agent sent to capture Toretto and O'Connor after it appears that they have murdered several DEA agents. He's clearly been hired to play Tommy Lee Jones from The Fugitive, and to his credit Johnson takes on the responsibility with gusto. There are lines of dialogue he recites in this film that should have the writers cringing with embarrassment, yet he delivers them with such conviction and charisma that he manages to make them work. As a character he's a fine addition to the line-up, and in terms of progressing the story he gives the franchise a whole new direction.

It would be easy to ignore the Fast films as throwaway entertainment, and it would be easy to do that because they are - but what outstanding throwaway entertainment. With this film they've become the finely tuned machine that they spend so much time showcasing: an engine built for speed, energy and to look good. On all three fronts, Fast Five excels.
Posted by Grant at 5:09 PM