Doctor Who: "The Bride of Sacrifice" 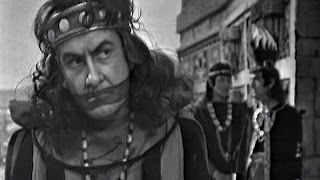 I last reviewed an episode of Doctor Who some time ago, so let's quickly recap. The TARDIS has materialised inside an Aztec tomb. When the Doctor and his companion exit the tomb, not only do they discover it was a one-way door with no apparent means of re-entry but Barbara is mistaken for the reincarnation of the goddess Yetaxa. While Barbara uses her position of power to attempt to dissuade the Aztecs from human sacrifice, the Doctor works to discover a way back inside the tomb so that they may escape.

"The Bride of Sacrifice" is the third part of "The Aztecs". The episode's title refers to the Doctor's granddaughter Susan. Since the high priest of sacrifice Tlotoxl cannot get to Barbara directly - he does not believe she is the goddess she claims to be - he strikes at the next-best target: Susan. Not only does he arrange for her to marry the appointed human sacrifice, but he manipulates Barbara into agreeing to have her brutally punished once she refuses the honour. Barbara, of course, reneges on the agreement the moment she realises what has happened, and this further weakens her status with the other high priest, Autloc.

It's not all high drama.There's a pleasant mixture of drama and comedy going on this week, with the latter provided by the Doctor's misadventures in the old people's garden. He's met an elderly Aztec woman, Cameca, and has struck up a nice friendship with her. A misunderstanding over a cup of cocoa leaves the Doctor engaged to be married. It's a wonderfully played sequence, not in the least because it makes it clear the Doctor isn't interested in marriage not because he dislikes Cameca or finds her foolish, but because he's entirely focused on escaping back to his TARDIS. The engagement is mortifying and embarrassing, certainly, but there's a visible nugget of affection from the Doctor towards his new fiancee.

This whole serial has been shot in an oddly dynamic fashion. I've only recently discovered that the outdated cameras used in the studio were incapable of zooming, so any transition from a medium shot to a close-up had to be achieved by physically tracking the camera in towards the actors. It does cause the odd mishap with cameras hitting props and bits of set once or twice - these cameras were unfeasibly large by today's standards - but it does create a remarkable sense of motion throughout what has been a fairly talky serial.

"The Aztecs" is consistently the best serial to date for Doctor Who's first-ever series. It works because its characters are so richly realised: even it's villain, Tlotoxl, has an appreciable point of view. We're three episodes in out of four, and all three have been utterly exceptional. In terms of the broader season it leaves us with 20 good episodes out of 29, and a quality ratio of 69 per cent.
Posted by Grant at 7:43 AM