Robin of Sherwood: "The King's Fool" 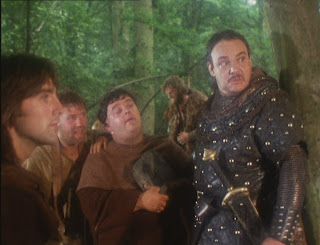 Robin (Michael Praed) rescues a Norman knight (John Rhys Davies) from bandits in Sherwood. The following morning the knight reveals himself to be Richard Lionheart, King of England, returned from his ransomed captivity in Germany, When the King pardons Robin and his men, and Sir Guy of Gisburne is disgraced, it seems as if everything is going to end happily for once - but how long can this new peace last?

In many traditional Robin Hood stories, the arrival of King Richard signifies the end of the narrative: his arrival back in Britain heralds a return to the normal order, and a restoration of justice and fairness for the people. As a result it's not a surprise to see Richard turn up in this season finale. What is a surprise is where the episode goes from there: this isn't the noble, people-loving king of legend. This is Richard Lionheart, a militaristic absentee monarch whose only interest in returning to Britain was to raid its coffers for more war money.

It's a fabulous transition throughout the episode, beginning with Richard as an anonymous and amiable knight, then a noble and powerful king, and finally a gradual unpleasant segue as each of Robin's band recognise that he's being taken for a ride. Richard's strategy is almost genius: find Robin Hood, overwhelm him with flattery, draw him into the upcoming wars in Normandy, and thus remove him from the equation back home. The pain on Robin's face when he realises how badly he's been played is palpable.

Of course this transition in how Richard presents himself would not be possible without a strong performance at its centre, and here the episode benefits enormously from the casting of John Rhys Davies. Today he's best known as Sallah in the Indiana Jones films or Gimli in The Lord of the Rings, but of course he's always been an immensely talented and engaging actor. His Richard I is one of the best I've seen. He balances the two aspects of the characters incredibly well: warm and charismatic when he's flattering Robin, and steely cold and calculating when plotting against him.

The episode's climax is unexpectedly brutal: Richard sends Gisburne to murder Robin and his remaining companions in their sleep. Gisburne, being the kind of henchman he is, wants to wake them first so they can see what's coming. By the end of the exchange Robin may have escaped, but Marian's been shot in the back and Gisburne's been beaten, shot and set on fire. It's clear to me that Gisburne is supposed to have died here, but he's back in Seasons 2 and 3.

Marian only survives via the intervention of Herne's magic. This is the first time fantasy elements have cropped up in the series since the original two-parter, which fascinates me. I remembered this series as a fantasy take on Robin Hood, but in this first season at least the only magic in evidence is in the beginning and the very end. Everything in between has been surprisingly traditional.

This is a great season finale, and the strongest episode of the series since "Robin Hood and the Sorcerer". It leaves Season 1 with five good episodes out of six - really, it's only "The Witch of Elsdon" that disappoints. The quality ratio, then, is an impressive 83 per cent.
Posted by Grant at 9:32 AM