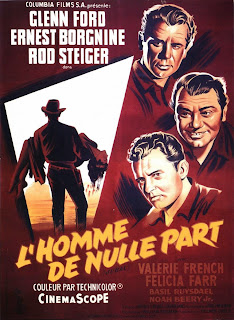 Mention westerns and a whole range of leading men come to mind: actors who pretty much established their on-screen reputations on the back of a horse with a six-shooter in their hand. Clint Eastwood, John Wayne, Roy Rogers, Sterling Hayden... the list is extensive, because for a few decades there the western was one of the most commercially successful film genres there was. The actor who fascinates me the most from American westerns is Glenn Ford. Time doesn't seem to have remembered Ford. Movie-goers of my generation seem to remember him solely as Jonathan Kent in Richard Donner's Superman: The Movie. Movie-goers of more recent generations don't seem to know him at all.

That's a shame, because he's an outstanding lead in pretty much every western he made. Eastwood made an impact with his steely resolve and narrow eyes. Wayne found his audience as an everyperson with an easygoing, drawling kind of attitude. Ford seemed to excel at playing the walking wounded: cowboys who, either through life or misadventure, had come to the screen with emotional scars. He's the weary and reluctant hero, who doesn't want to pull his gun but knows he's going to have to. (The one key exception is 3:10 to Yuma, where he's deliberately cast against type.)

So let's take Jubal, a 1956 western directed by Delmer Daves and starring Ford, Ernest Borgnine, Rod Steiger and Valerie French. Ford plays Jubal, usually referred to by his friends as "Jube". He's an itinerant cowboy who gets found, exhausted and unconscious, by a cattle rancher named Shep (Borgnine). Shep takes Jube back to his ranch, where he introduces him to his young wife Mae (Valerie French) and his employees - including the sour, resentful Pinky (Rod Steiger).

Shep is a coarse, uncomplicated man, and is already struggling to make Mae happy. Mae, meanwhile, has been sleeping with Pinky behind Shep's back. When Jube is made foreman over Pinky, and when Mae rejects Pinky's advances in favour of seducing Jube, Pinky takes matters into his own hands to destroy everybody's lives. So basically it's Shakespeare's Othello: Shep as Othello, Mae as Desdemona, Jubal as Cassio and Pinky as Iago. The fine details have shifted, but the core set-up is clear as day. It's a genius idea, because it gives the film a distinctive and powerful narrative around which Daves can set up all the usual gorgeous countryside and tense showdowns that are expected from a western.

Ford is great, playing a man who's direct, responsible and honourable. When Shep offers him a job he politely accepts it. When offered a promotion he questions how his co-workers will accept it. When Mae makes amorous advances, he firmly but politely rebuffs her. Like many of Ford's performances, there's a lot of acting in his eyes and in his pauses.

Charles Bronson has a solid supporting role as Reb, another wandering cowboy that gets picked up by Shep's cattle ranch. He's basically there to be a best friend and sidekick for Jubal, and in that respect he does very well. Ernest Borgnine plays Ernest Borgnine: he works in the context of the story, but there's nothing he does here that stands out or makes me reconsider his limitations as a performer. Valerie French walks a tightrope as Mae. It would be easy to make her entirely unlikeable, yet she manages to draw out an unexpected amount of nuance and depth. In many ways she's a Hollywood femme fatale, but there's clearly a lot more going on than that and she does ultimately gain a lot of sympathy.

It's Rod Steiger who is the stand-out as Pinky. He scowls. He mutters. He fidgets. He seems uncomfortable without something in his hands - usually a gun. He hates Jubal from the moment they meet, and his hatred only boils further and further as the film goes on. In some respects he's repeating his performance as Jud Fry in Fred Zinnemann's Oklahoma!, which had been released the previous year. That was a broadly played part in a Hollywood musical. Steiger's work here is a lot more complex and interesting to watch - if only to see the idiosyncratic manner in which he delivers his lines, full of stretched vowels and tortured expressions. It's as if spite is oozing out of the man's pores.

Behind all of this Shakespearean intrigue are the stunning mountains of Wyoming. The film is shot in Cinemascope, and Delmer Daves keeps one eye on the scenery at all times. This is proper western filmmaking, full of widescreen vistas and breathtaking picaresque photography. Cinematographer Charles Lawton Jr does an outstanding job.

Daves was a great Hollywood director, helming films like Destination Tokyo, Dark Passage, Broken Arrow and 3:10 to Yuma. Jubal stands up alongside all of those films; it's really one of his absolute best works.
Posted by Grant at 4:56 PM