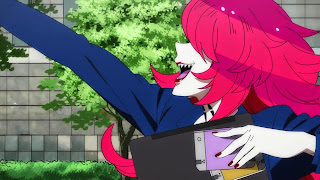 That doesn't seem like quite enough plot to sustain an entire 25 episode - and there's a reason for that. The story cited above fills about 12 minutes, and forms the second half of the episode. The first half consists of 12 minutes of clips from the previous 10 episodes, as the Gatchaman team take turns in reminiscing over their experiences since Hajime joined the team in episode 1.

Now I am very much aware that anime is an expensive art form, and that costs often overrun and must be clawed back in some fashion. An episode comprising clips of pre-existing footage is sometimes a necessary evil for producers, and while I'm often bored by these episodes I understand the reason why they exist.

On the other hand this is only a 12 episode series. If the production team at Tatsunoko can't effectively budget 12 half-hour episodes of anime after so many decades producing them, then I worry something has gone terribly wrong. After the stunning fashion in which the last episode ended, this feels like a horrible thing to do to your audience.

What new scenes we get are tremendous: just when it seemed as if all hope was lost, Rui and Hajime manage to save the day - until Katze ups the ante, of course, and we finish with matters seeming worse than ever. This is the sort of stuff that should form the climax of an anime series, rather than slow, melancholic reminiscences that waste the series' momentum and try the audience's patience.

Am I being too harsh? Perhaps. At the same time I can't deny that following up on episode 10's superb action sequences with this sudden emergency stop was very disappointing. Obviously as a serialised narrative this episode can't be skipped, but you can easily skip everything up to the ad break without missing a thing.

We're 11 episodes into the series with one to go, and eight of them have been great. Hopefully with a full episode of story next time around things will come to a satisfying conclusion. The quality ratio for Gatchaman Crowds stands at 73 per cent.
Posted by Grant at 10:56 PM