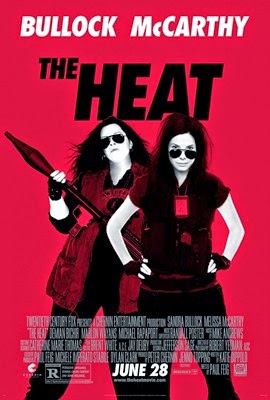 Straight-laced FBI special agent Sarah Ashburn (Sandra Bullock) is dispatched to Boston to track down an elusive drug kingpin, and immediately butts heads with scrappy, unconventional police detective Shannon Mullins (Melissa McCarthy). Together they must put aside their differences to crack the case, and so on and so forth. You really don't need a synopsis for this stuff.

Reviewing this kind of mainstream Hollywood comedy is always a tricky exercise, since the level to which you're likely to enjoy this film is conditional on several factors. Do you like this style of comedy? Do you like the two lead actors? Do you enjoy films produced within a fairly tight, traditional genre formula, or do you favour comedies that move out of that comfort zone and provide something genuine fresh and original?

There's no real originality to be found in The Heat. It is, for all intents and purposes, Neil Simon's The Odd Couple re-fashioned to be about police detectives. That it seems fresher than it is is largely down to director Paul Feig's casting of the two leads with women rather than men, which seems to be the general default for Hollywood productions of this kind.

I'm finding I really like Paul Feig's style. His 2011 comedy Bridesmaids felt like an extraordinary step forward for women in mainstream comedy, presenting the kind of coarse, scatological humour that had traditional been the exclusive realm of more male-focused films like The Hangover. Not only did he demonstrate women could do that sort of comedy just as well, he managed to direct a film that actually did it a lot better than anything else on the market. Part of the trick, I think, is the manner in which he co-opts traditionally male styles of film comedy for female characters, but still manages to allow moments where they can still be women. Lovers of the Bechdel Test must adore his movies.

The Heat is nowhere near as accomplished as Bridesmaids, but it still mostly does a very good job. Feig pairs two talented comedic actors - McCarthy and Bullock - and allows each of them their own moments to shine and be funny. It's a proper partnership, and for me they shared a lot of great chemistry. I mean seriously: how great is it that a Hollywood studio would actually bankroll a well-budgeted mainstream comedy starring two women aged 42 and 48? On the other hand, this isn't really something that should be impressing me: it's like giving 20th Century Fox a cookie for actually casting talented people and allowing them to earn the studio some money.

The film is not perfect, of course. For one thing there's a string of jokes about an albino supporting character that almost manage to be about how the albino in popular culture is always represented as unnatural or creepy, but accidentally slip into making that albino actually seem unnatural and creepy. Similarly there's a scene where the leads interrogate a black drug dealer to get some information and accidentally drop him two stories from a fire escape to the bonnet of his car. In the light of contemporary American race relations, the sight of two cops beating up an African American doesn't seem particularly appropriate or funny. It's also too long, which is a problem affecting pretty much every Hollywood production in the last 10-15 years.

Altogether I enjoyed The Heat a lot. It's based around a great pair of characters, and includes several genuinely big laughs. As with all comedies, your own experience is going to be pretty subjective. If you liked Bridesmaids, and think that either Bullock or McCarthy are funny, then you'll probably enjoy this one as much as I did.
Posted by Grant at 5:07 PM