Robin of Sherwood: "Alan a Dale" 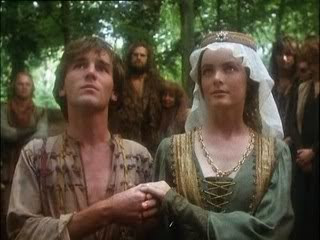 Robin and his outlaws come across Alan a Dale, a musician who has fallen in love with a local baron's daughter - only to see her unwillingly engaged to the Sheriff of Nottingham. Happy to take any opportunity to disrupt the Sheriff's plans, Robin sets up a scheme to rid him of his bride and her lucrative dowry.

Alan a Dale has been part of the Robin Hood mythology since about the 17th century, but when developing Robin of Sherwood creator Richard Carpenter elected not to include him in the Merry Men - instead choosing more obscure characters like Much the Miller's Son or complete inventions like Nasir. In a way it's rather pleasant to see him unexpectedly pop up five episodes in. This is the only episode in which he appears, but he's a welcome guest character to have.

This is a very light-hearted episode, with a lot of opportunities for jokes and humorous situations, cross-dressing, disguises and heists, and the like. To an extent it does still feel as if Carpenter is feeling his way around his own show, trying to work out which angles work and which don't. It's interesting that after all of the demon-worshipping, pre-Christian mythology and supernatural elements, the series has gone on to be a fairly straight-forward adventure. The magical elements will return in Season 2, but for now Robin of Sherwood is remarkably conventional.

Peter Hutchinson is remarkably earnest as the titular Alan, but in a way that suits the episode: he's overly serious and depressed because it's rather funny to watch. Stephanie Tague plays Mildred, the baron's daughter, and she's in the unfortunate position of being serious and miserable without having jokes made about it. As a result she's a fairly irritating character to watch.

There's some great material in here for both the Sheriff (Nickolas Grace) and Sir Guy of Gisburne (Robert Addie). Sir Guy gets a moment of genuine sympathy when he listens to Mildred about her unwanted marriage. The Sheriff gets to have two baths in one episode - the second of which he shares with Sir Guy in an unexpected scene of homo-eroticism. It's hard to know whether it was intentionally funny or not.

One thing I noticed in this episode is an unnamed blonde man hanging out with Robin Hood and his gang. I honestly have no idea who he is. He isn't named, and he doesn't have dialogue. It's as if an introductory scene was cut. I'm going to be keeping an eye out to see if this mystery merry man comes back.

This is an enjoyable episode, although I can't wait for the series to return to more fantasy-based supernatural material. It's the fifth episode, and the fourth good one: for now Season 1's quality ratio is running at 80 per cent.
Posted by Grant at 10:18 AM