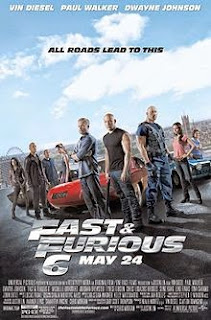 It seems that, by the release of Furious Six in 2013, the Fast and the Furious saga had slipped into a rather comfortable routine: a new film every two years, pushing forward the increasingly soap opera-like narrative each time and also pushing the franchise further and further across sub-genre borders. Not content with their shift from street racing movies to heist flicks, the makers of The Fast and the Furious now expanded their repertoire to include international espionage as well.

It seems that one of the key drivers behind the Furious movies is seeing just how far the audience's credulity can be stretched before it hits breaking point. A key plot development of this film is that Lette, who very clearly died in Fast & Furious back in 2009, did not in fact get shot in the head but was actually blown into a ditch by an exploding car, suffered amnesia, and wound up working as a driver for the international criminal mastermind who ordered her murder in the first place. Who'd have seen that coming? The ludicrous excess extends to the film's action sequences, which include a sports car versus tank fight and a chase down the longest runway in the history of the human race.

Here's the thing: this push further and further away from realism has been done in such an incremental fashion, and the films have been performed in such a likeable and engaging manner, that it's genuinely hard not to throw caution to the wind and just enjoy the stupidity. Nothing makes sense in this film: not the storyline, nor the villain's master-plan, nor the logic of the action bits. There's a confrontation midway through the film between Dom and Shaw, where Shaw emphasises the importance of having a code to live by and Dom pushing for "family" all the way. The constant emphasis on family is driven to the point of hilarity, but again it's hard not to just shrug and go with it. By this stage of the franchise it's effectively critic-proof: anybody likely to roll their eyes at the content here almost certainly gave up on the films two movies ago.

The returning cast all continue to do their thing in amiable ways. Gal Gadot seems a big winner here: her part was slight and fairly tedious back in Fast & Furious. While she got more to do in Fast Five she gets a hell of a lot more to do here. I'm now quite keen to see her take on Wonder Woman in Warner Bros' upcoming blockbuster. It's a pleasure to see Michelle Rodriguez back as well. I've always been a fan of her in a number of pictures, and she slips back into the ensemble without difficulty.

Dwayne Johnson's got a new partner in the form of ex-MMA champion Gina Carano, who's got a huge amount of screen presence and who dominates an excellent violent altercation between her US agent Riley Hicks and Michelle Rodriguez's Lette. I was also rather impressed with Luke Evans as Owen Shaw: again he oozes charisma in a fairly underwritten role, and he's followed it up with prominent roles in The Hobbit trilogy and Dracula Unbound. I keep thinking he's got enormous potential as a future leading man.

Another aspect of the film that fascinates me is its treatment of film-to-film continuity. It takes characters from earlier films and weaves them seamlessly back into the narrative. In one particular master-stroke it actually folds the fairly self-contained The Fast and the Furious: Tokyo Drift back into the main series and repositions it between this and the subsequent Fast & Furious 7. It's the sort of thing you expect to see in a Star Trek or Marvel Studios franchise, but not necessarily in an action franchise. Looking forwards I could easily see Universal Pictures splitting the franchise into multiple offshoots: they could easily spin Hobbs off into his own films any time they wanted to, for example.

Ridiculous action scenes, overly earnest gushings about "family", fast cars, well-dressed attractive characters, and a populist rap soundtrack all get topped off by the best post-credit scene since Nick Fury confronted Tony Stark. These may be ridiculous films, but they know it - and they warmly invite their audience to shut up and go for the ride.
Posted by Grant at 7:56 PM